Thando Ntini returned figures of 4/19 and bowled one maiden in his eight-over spell. 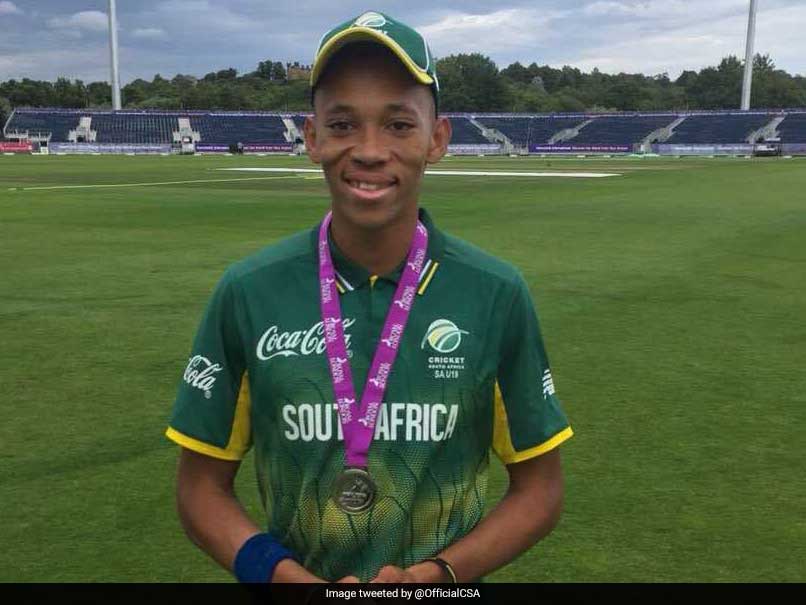 Thando Ntini, son of South Africa pace legend Makhaya Ntini proved his calibre with the ball as the South Africa Under-19 side defeated England U19 by 79 runs in the first of three-match one-day series in Durham on Monday. Thando returned figures of 4/19 and bowled one maiden in his eight-over spell as the visitors overcame host England with ease. Apart from Thando, a half-century by Jonathan Bird helped the youth South Africa side clinch victory in the opening encounter as they went 1-0 up in the series. Cricket South Africa took note of the impressive bowling performance by the young Thando and said, "8 - 1 - 19 - 4. Looking at those bowling figures, he's definitely earned the Man of the Match accolade, as Thando Ntini inspired the SA under-19s to a 79-run victory in the first Youth ODI against England at the Riverside Stadium. Take a bow, son! #FutureStars #ENGvSA."

Looking at those bowling figures, he's definitely earned the Man of the Match accolade, as Thando Ntini inspired the SA under-19s to a 79-run victory in the first Youth ODI against England at the Riverside Stadium

South Africa posted a competitive 229/9 after they were asked to bat first. Bird grabbed his opportunity and played the aggressor in his 54-run, second-wicket stand with Thamsanqa Khumalo.

Meanwhile, Ntini and spinner Kgaudise Molefe, chipped in with 12 and eight runs each respectively before they partnered to give England a nightmare start.

Ntini got the first breakthrough, followed by Molefe's (2/29) third-over double strike as Ben Charlsworth, Harrison Ward and Jack Haynes were dispatched for one run each.

Captain Tom Banton (9) fell to Campher (1/37) at the start of the 11th over, leaving number five batsman Oliver Robinson to plot the way forward.

The middle order batsman played a gritty knock, returning the most runs for the home side, but his 54 (74 balls) was plagued by falling wickets, including that of Jack Davies (6) before he became Ntini's second victim.

After that Ntini and Jade de Klerk (2/18) made quick work of the remaining batsmen, bundling out the hosts for 150 with a little over 10 overs to spare. Luke Hollman was not out for 30 off 37 deliveries.

The second match will take place on July 26 in Newcastle.

England U19 Makhaya Ntini Cricket
Get the latest updates on IPL Auction 2023 and check out  IPL 2023 and Live Cricket Score. Like us on Facebook or follow us on Twitter for more sports updates. You can also download the NDTV Cricket app for Android or iOS.