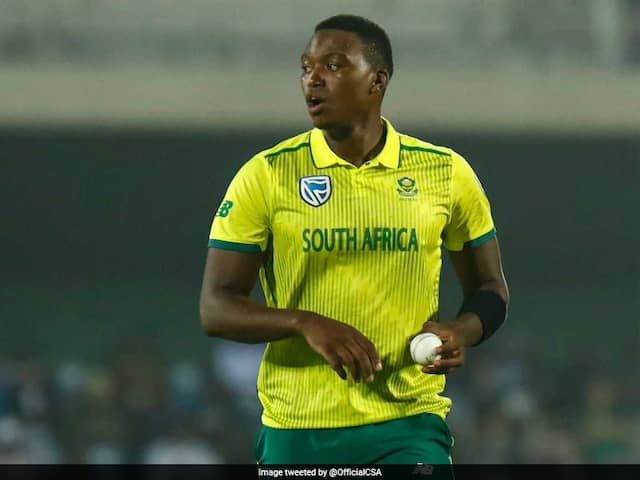 Lungi Ngidi will miss all South Africas matches against Pakistan this season.© Twitter

South Africa suffered an injury setback after fast bowler Lungi Ngidi was ruled out for 12 weeks. In a statement on Friday, Cricket South Africa said Ngidi, 22, had sustained a right knee ligament injury while fielding during the one-off Twenty20 international (T20I) against Australia last week and will now also miss the upcoming home summer series against Pakistan between December and February.

Dr Mohammed Moosajee, the team manager and doctor, said investigations and assessments on his return to South Africa had revealed a "significant" injury which will require a minimum of 12 weeks rest and rehabilitation.

"Lungi fell awkwardly while fielding during the T20I against Australia last Sunday. He underwent investigations and further assessments with knee specialists upon his return to South Africa, which revealed a significant ligament injury to the right knee. Due to the significant nature of the injury, he will require a minimum of 12 weeks of rest and rehabilitation to make a successful return to play," Moosajee was quoted as saying by Cricket South Africa website.

Ngidi will miss three Tests, five one-day internationals and three Twenty20 internationals during Pakistan's tour between December 24 and February 6. The one-day matches are regarded as key in South Africa's build-up to the 2019 Cricket World Cup in England and Wales.

Ngidi took six for 39 on his Test debut against India last season and formed part of a formidable fast bowling trio with Dale Steyn and Kagiso Rabada during South Africa's one-day series win in Australia recently.

Australia Cricket Team Lungi Ngidi Cricket
Get the latest updates on IPL 2020, check out the IPL Schedule for 2020 and Indian Premier League (IPL) Cricket live score . Like us on Facebook or follow us on Twitter for more sports updates. You can also download the NDTV Cricket app for Android or iOS.