Highlights from the 1st ODI match between India (IND) and (SL) Sri Lanka at the HPCA stadium, Dharamshala on Sunday. 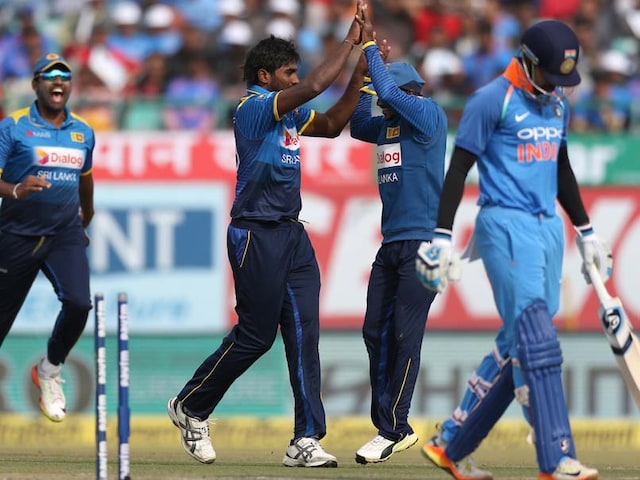 India vs Sri Lanka, Highlights: The visitors had bundled out the hosts for a paltry 112.© AFP

Thisara Perera-led Sri Lanka bounced back from their Test series drubbing in style by beating India by seven wickets in the opening game of the three-match One-Day International (ODI) series at Dharamshala on Sunday. The Lankan lions left the number two ODI ranked team embarrassed as their bowlers did not allow the famed Indian batting line-up to perform to their capabilities. Winning the toss, Perera elected to bowl and put India into bat. Sri Lanka pacers Suranga Lakmal and Angelo Mathews ripped through the Indian batting top-order in swinging conditions as the home side were bowled out for 112. India, however, struck early through Jasprit Bumrah and Bhuvneshwar Kumar to reignite their hopes of an unlikely win. But a brilliant 49 from Upul Tharanga and a 49-run unbeaten stand between Angelo Mathews (25) and Niroshan Dickwella (26) got the visitors comfortably across the line. (Scorecard)

Seldom do you see the Indian batsmen getting out cheaply but this time they could not counter the terrific Lankan bowling line-up as they were left troubled from the first ball of the innings. Eight of the Indian batsmen could not cross the double-digit with four of them recording a duck. Only MS Dhoni (65), Hardik Pandya (10) and Kuldeep Yadav (19) registered a double-digit score.

Veteran cricketer MS Dhoni and Kuldeep Yadav were the saving grace for India as they stitched together a partnership of 41 runs for the eighth wicket. While, Kuldeep perished for a well made 19 off 25 balls, Dhoni notched up a patient ODI half-century to help the hosts cross the 100-run mark.

When and Where to Watch Live: India (IND) vs (SL) Sri Lanka