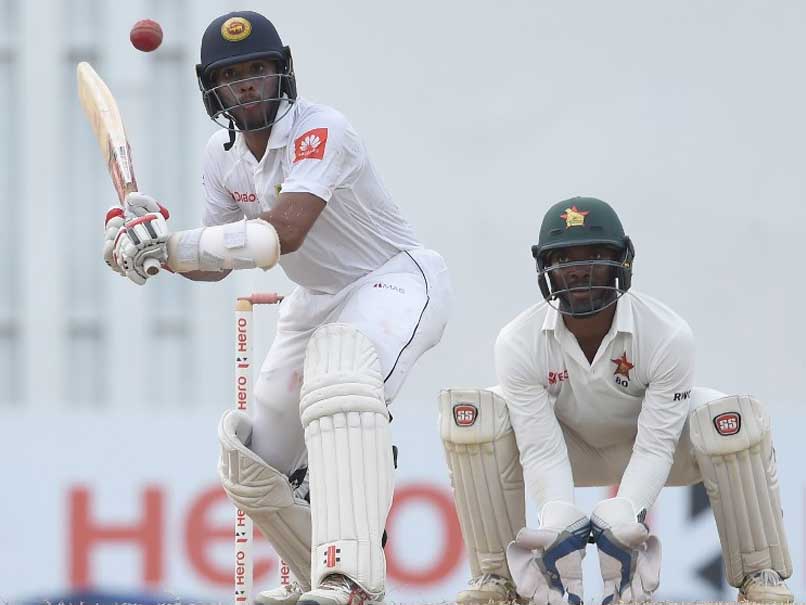 Kusal Mendis was batting on 60 when play ended on Day 4.© AFP

Kusal Mendis scored a fluent half-century to keep Sri Lanka's hopes of chasing a record 388 alive on day four of the one-off Test against Zimbabwe, in Colombo on Monday. The hosts were 170 for three at stumps, with Mendis (60) batting alongside Angelo Mathews (17) at Colombo's R Premadasa Stadium. Sri Lanka's highest-ever successful run chase was against South Africa in 2006, when they achieved their 352-run target in Colombo. Zimbabwe skipper Graeme Cremer dented the hosts with his leg-spin, claiming the important wickets of Upul Tharanga (27) and his opposite number Dinesh Chandimal (15).

Opener Dimuth Karunaratne was bowled by left-arm orthodox spinner Sean Williams for 49 as the visitors persisted with an all-spin attack in the 48 overs bowled in the innings so far.

Mendis, who fought off hamstring trouble in the final session of play, put together an unbeaten 37-run stand with Mathews to take the delicately poised Test into its final day.

Zimbabwe were earlier bowled out for 377 in the second session, with Sikandar Raza (127) top-scoring for the visitors with his maiden Test century.

Cremerwas the last man out for 48 off left-arm spinner Rangana Herath, who returned figures of 6-133 to take his match tally to 11 wickets.

The Pakistan-born Raza steered the team's middle and lower order to help his side accumulate another 318 runs after being reduced to 59-5 on day three.

Raza's 144-run partnership with Malcolm Waller (68) was the highlight of the Zimbabwe innings after the duo resumed on the overnight score of 252-6.

Zimbabwe are seeking their first-ever Test win against Sri Lanka, who are looking for redemption under new Test captain Chandimal. He took over from Mathews, who resigned after calling the one-day series loss a "hard pill to swallow".

Comments
Topics mentioned in this article
Sri Lanka Cricket Team Zimbabwe Cricket Team Kusal Mendis Graeme Cremer Sikandar Raza Cricket
Get the latest updates on ICC Women's Cricket World Cup 2022 and IPL 2022, check out the Schedule , Live Score and IPL Points Table. Like us on Facebook or follow us on Twitter for more sports updates. You can also download the NDTV Cricket app for Android or iOS.