Kuldeep Yadav spoke about the guidance given to him by the senior players in the Indian team such as MS Dhoni, Virat Kohli, and Rohit Sharma. 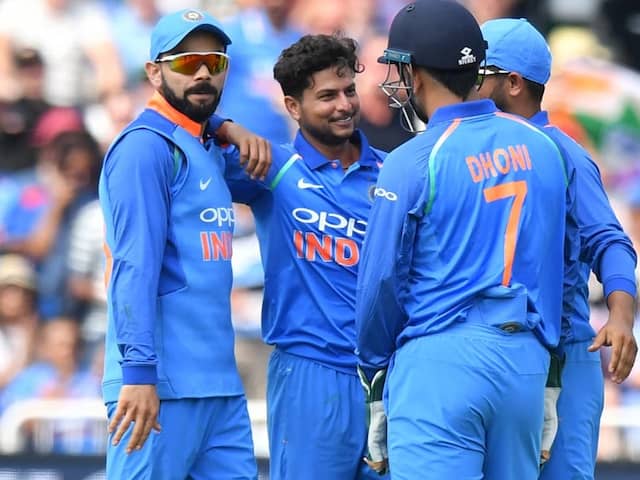 Kuldeep Yadav said he would not have been "half as effective" if it wasn't for seniors guiding him.© AFP

Kuldeep Yadav has attributed MS Dhoni and Virat Kohli for not only being effective as a bowler on the international stage but also India's good showing in the "last couple of seasons". Kuldeep Yadav said Virat Kohli and MS Dhoni have consistently guided him and backed his abilities. Kuldeep (along with fellow spinner Yuzvendra Chahal) is expected to play a vital role for India in the 2019 World Cup in England and Wales. Kuldeep Yadav will take heart from his performance in in India's tour to England last year, where he took nine wickets in three ODI matches, including figures of 6-25 on July 2018 against the hosts in Nottingham.

"Credit has been given to us (Kuldeep and Chahal), but we couldn't have been half as effective had it not been for the senior pros guiding us. You need a skipper who backs you and believes in your ability to shine on the big stage. You think we could have been so successful if (Virat) Kohli bhai had not given us the freedom to attack? I don't think so," Kuldeep Yadav told IANS.

Kuldeep Yadav spoke about the guidance given to him by the senior players in the Indian side such as MS Dhoni, Virat Kohli, and Rohit Sharma. Kuldeep attributes them for the successes that he and Chahal have achieved in the past couple of years.

"What we have achieved as a team in the last couple of seasons has a lot to do with the way Kohli bhai and (MS) Dhoni bhai guide us in the middle. While you can all hear Dhoni bhai constantly guiding us on the stump microphone, Kohli bhai and Rohit (Sharma) bhai work closely with Dhoni bhai to actually plan our strategies. It is a complete work of the seniors who are brilliant when it comes to first planning and then implementing the plans."

Kuldeep Yadav also has plans on how he would deal with his Kolkata Knight Riders' prolific teammate Andre Russell, who scored 510 runs in 14 matches with a strike rate of 204.81, the highest strike rate in IPL 2019.

India will play two warm up matches prior to the World Cup -- against New Zealand on May 25 and against Bangladesh on May 28. They begin their World Cup campaign against South Africa on June 5.