Kuldeep Yadav has cleared the air over a statement he made in regards to India's 2011 World Cup-winning captain MS Dhoni. A news agency had quoted Kuldeep Yadav as saying that were a "lot of times" when even MS Dhoni "goes wrong". On Wednesday, however, Kuldeep Yadav took to Instagram to clarify his statement, saying that it was "another made up controversy and that the "news is total false". The left-arm spinner, who is part of the India squad for the 2019 World Cup to be held in England and Wales, signed off his Instagram story with "#Much respect Mahi bhai".

"Here we go for another made up controversy from our media who loves to make tangy rumours for no reason. Just want to throw some light on the issue that has been proliferated by some people, that the news is total false. I didn't give any inappropriate statement about anyone," Kuldeep said in an Instagram story on Wednesday. 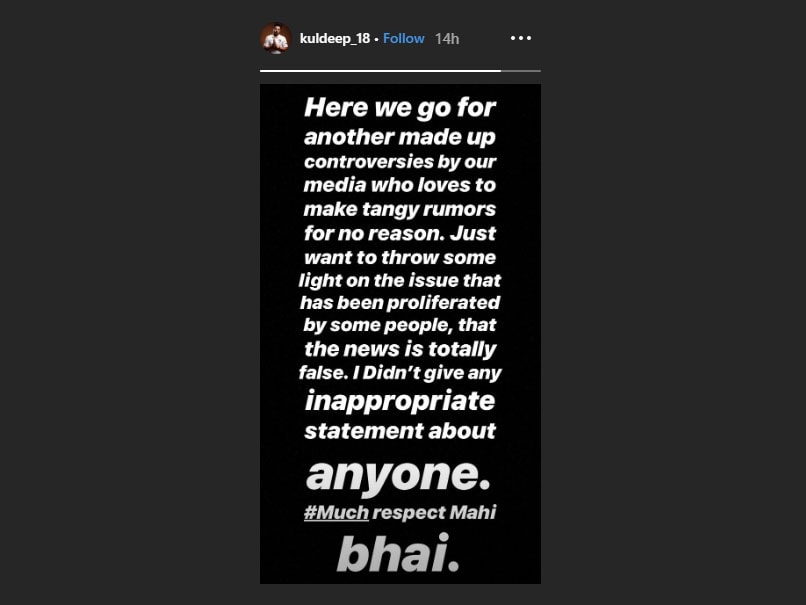 "There are a lot of times he (Dhoni) goes wrong but then you can't say that to him," the news agency had quoted Kuldeep Yadav as saying on the sidelines of the CEAT Cricket Rating Awards in Mumbai. The report was carried on NDTV as well on Tuesday.

Kuldeep received a lot flak on social media from the fans following his comments on the former India captain.

In the ICC World Cup 2019, starting on May 30 in the UK, Dhoni will be part of the Indian team that will be led by Virat Kohli.

Kuldeep has been picked in the 15-member squad for the World Cup along with wrist spinner Yuzvendra Chahal. Part-time spinners Kedar Jadav and Ravindra Jadeja have also been included in the World Cup squad.

India will start their World Cup 2019 campaign against South Africa on June 5.

MS Dhoni Kuldeep Yadav World Cup 2019 Cricket
Get the latest Indian Premier League 2020 news, check out the IPL 2020 schedule, Cricket live score . Like us on Facebook or follow us on Twitter for more IPL 2020 updates. You can also download the NDTV Cricket app for Android or iOS.
Highlights
Related Articles

Shane Warne Asked If BCCI Was Postponing IPL, Twitter Came Up With These Gems