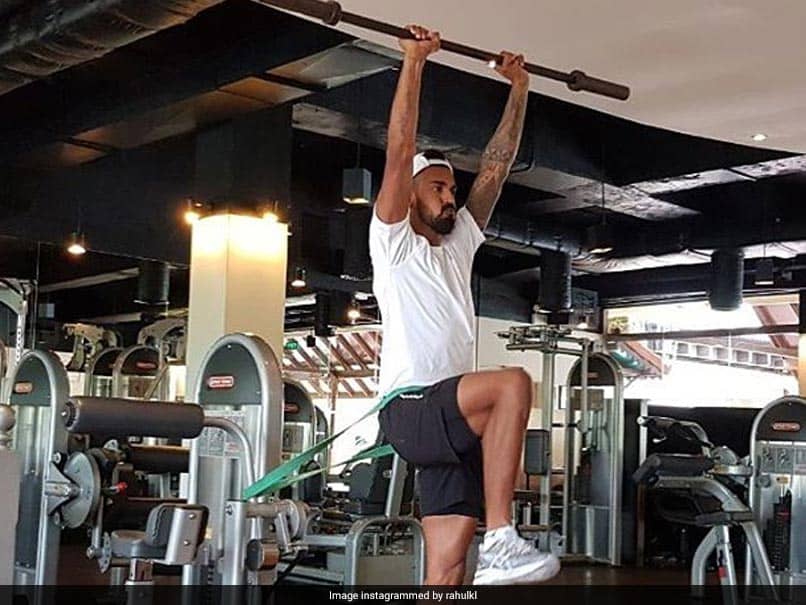 The Indian Premier League 2018 has been Rahul's best performance in the tournament so far.© Instagram

India's Sports and Youth Minister, Rajyavardhan Rathore, began an initiative for celebrities to inspire people to get fit by posting a video of himself doing push-ups on Tuesday. Rathore nominated Virat Kohli, Hrithik Roshan, and Saina Nehwal to post videos of their workouts. The initiative has picked up a lot of buzz as top sportspersons and actors have come out in support of the minister's initiative. The latest addition to the campaign is Indian cricketer KL Rahul. Rahul, who was challenged by skipper Kohli, posted a video of him, showing off his favourite workout move. The 26-year-old cricketer posted a video in which he can be seen performing a modified version of chin-ups. The Kings XI Punjab opener further challenged his India teammates Hardik Pandya and Dinesh Karthik.

Earlier, Kohli, who was seen performing a variation of plank in the video, took to Twitter to accept the challenge and also nominated his wife Anushka Sharma, Prime Minister Modi and MS Dhoni to take up the challenge. "I have accepted the #FitnessChallenge by @ra_THORe sir. Now I would like to challenge my wife @AnushkaSharma , our PM @narendramodi ji and @msdhoni Bhai for the same. #HumFitTohIndiaFit #ComeOutAndPlay," he wrote.

Kohli also nominated youngsters, Shreyas Iyer and KL Rahul, to take up the challenge too. He wrote, "(2/2) This is my way to keep fit @Ra_Thore sir. I challenge @ShreyasIyer15 and @klrahul11 Let's bat together to get India, fitter. #HumFitTohIndiaFit #FitnessChallenge #ComeOutAndPlay"

Comments
Topics mentioned in this article
India Cricket Team Lokesh Rahul Virat Kohli Cricket
Get the latest updates on IPL 2021, IPL Points Table , IPL Schedule 2021 , live score . Like us on Facebook or follow us on Twitter for more sports updates. You can also download the NDTV Cricket app for Android or iOS.