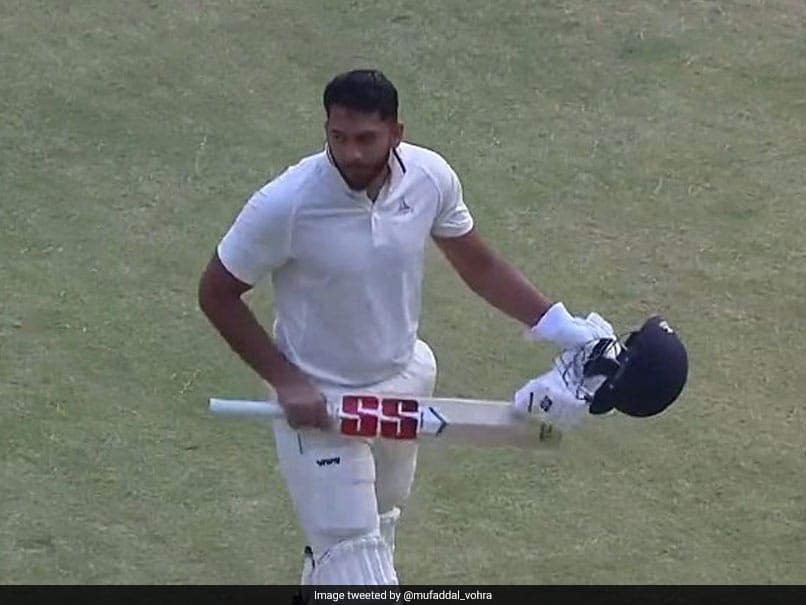 Shahrukh Khan starred for Tamil Nadu with a 148-ball 194 against Delhi in Ranji Trophy.© Twitter

Fresh from a million dollar plus IPL contract and some quality time among world beaters in the Indian dressing room, M Shahrukh Khan showed his wares in red ball format with magnificent 148-ball-194 that ensured first innings lead for Tamil Nadu against Delhi in the Ranji Trophy. Coming in to bat at number seven with Tami Nadu in deep trouble, Shahrukh soaked up the pressure as he fell just six short of converting his maiden first-class century into a double but put Tamil in front with his 10 sixes and 20 fours.

Using his long levers and brute power, Shahrukh hit some flat sixes that crash landed on the stands and most of it was in the straight arc between long off and long on.

Resuming at a tricky 75 for two on third day after Delhi's innings ended at a commanding 452, Tamil Nadu made a strong riposte on the third day of the Elite Group H match with the 26-year-old Shahrukh leading the way.

Tamil Nadu were all out for 494 before stumps were called, securing a vital first-innings lead of 42 runs.

The experienced Baba Indrajith, too, made a handsome contribution, stroking his way to 117 off 149 balls at the Barsapara Stadium that witnessed a barrage of fours and sixes, leaving the formidable outfit from the country's north stunned.

On a day that truly belonged to Shahrukh, who was bought by Punjab Kings for Rs 9 crore in the IPL mega auction last weekend, left-arm spinner Vikas Mishra emerged as Delhi's most successful bowler as he returned figures of 6/108 after a hard day's work.

Seasoned left-arm seamer Pradeep Sangwan was smashed for 107 runs in his 21 overs while his pace colleague, Kuldip Yadav conceded 105 runs from 18 overs, all thanks to the aggressive batting by the duo of Indrajith and Shahrukh, who added 134 runs after their team had lost five wickets for just 162 runs.

Indrajith struck 17 fours and two sixes during his stay in the middle, before he got lbw to Nitish Rana.

The best was yet to come as Shahrukh put on a stand of 178 runs with wicketkeeper Narayanswami Jagadeesan, who chipped in with a 50 off 71 balls while enjoying his partner's belligerence from the non-striker's end.

Shahrukh reached his century in 89 balls and carried on in the same vein to not just rescue his team from a difficult position but also ensure three points for them.

In the other match of the group, Chattisgarh beat Jharkhand by eight wickets inside three days to get full points.

Punjab Kings
Get the latest updates on ICC T20 Worldcup 2022 and CWG 2022 check out the Schedule, Live Score and Medals Tally. Like us on Facebook or follow us on Twitter for more sports updates. You can also download the NDTV Cricket app for Android or iOS.