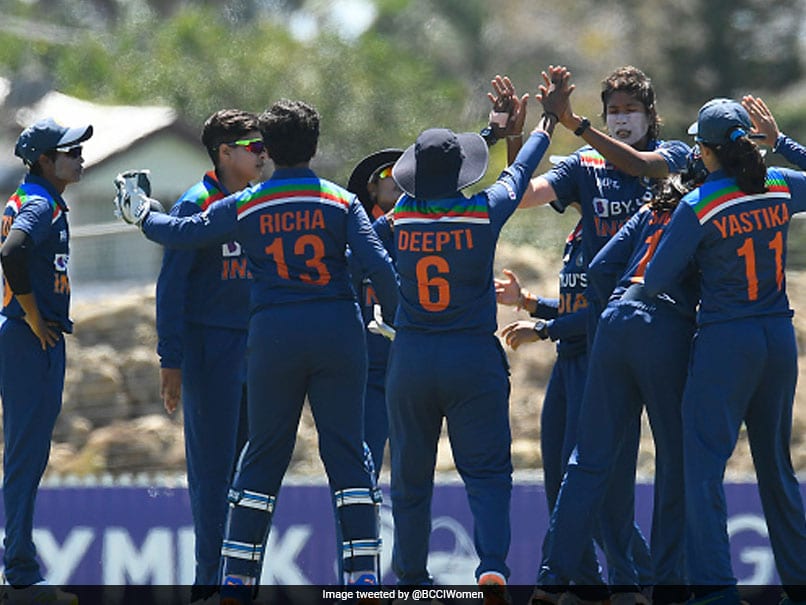 India Women produced a fine batting display to end Australia Women's record 26-match unbeaten streak with a two-wicket in the third and final ODI at Harrup Park in Mackay on Sunday. India Women recorded their highest-ever successful run-chase in ODIs by overhauling the 265-run target with 3 balls to spare. Australia, who had last lost an ODI match back in 2017, clinched the series 2-1, having won the first two matches of the series. The focus will now shift to the one-off pink ball Test between the two teams that begins at the Carrara Oval in Queensland on September 30.

India will go into that Test full of confidence having ended the longest winning-streak in ODIs (both men's and women's).

India lost the second ODI by the narrowest of margins, having dominated for much of the game.

This time, however, there was no denying the Indian women's team as the batters came to the party, making valuable contributions throughout the innings to stop the Australian juggernaut.

Deepti Sharma (31 off 30 balls) and Sneh Rana (30 off 27 balls) too played crucial knocks as India registered their greatest ever run-chase in the history of women's ODI cricket, which also happened to be the second highest run-chase by any team against Australia.

It was veteran Jhulan Goswami who put the finishing touches to India's famous win with a lofted drive straight down the ground for a boundary.

Earlier, winning the toss and electing to bat, Australia found themselves in a spot of bother after being reduced to 87 for four.

Beth Mooney, star of Australia's dramatic last-ball win in the 2nd ODI, once again came to the rescue for her team, scoring a 64-ball 52 to steady the ship.

Jhulan Goswami was the pick of the Indian bowlers, registering figures of three for 37 while Pooja Vastrakar also took three wickets, giving away 46 runs off her 9 overs.

India began their in earnest with Smriti Mandhana (22) and Shafali adding 59 runs for the opening wicket.

Shafali and Yastika then strung together a 101-run partnership for the second wicket to put India in the driver's seat.

Australia, though, fought back, removing Shafali, Richa Ghosh and Yastika in quick succession.

Vastrakar didn't stick around too long either while captain Mithali Raj could only manage 16 off 28 before she was sent packing too.

Just when it seemed that the Australians would pull off yet another unlikely win, Deepti Sharma and Sneh Rana hit match-winning cameos to put India on the brink. Goswami finished things off with a four to give India a memorable win on Australian soil.

Australia Women Cricket Mithali Raj Shafali Verma Smriti Mandhana Deepti Sharma Sneh Rana
Get the latest updates on T20 World Cup, check out the T20 World Cup Schedule and Live Score . Like us on Facebook or follow us on Twitter for more sports updates. You can also download the NDTV Cricket app for Android or iOS.