On Yuvraj Singh's Birthday, ICC Tweets Throwback Video Of His 6 Sixes In An Over

The ICC shared a video of Yuvraj Singh's historic six sixes in an over on his 38th birthday. 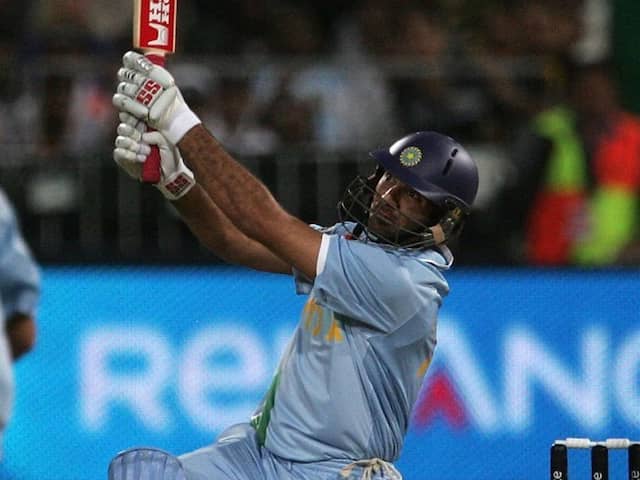 Yuvraj Singh hits the sixth six in the over against England in the 2007 World T20.© AFP

The International Cricket Council (ICC) led the way as wishes poured in for former India batsman Yuvraj Singh on his 38th birthday. The stylish left-hander was known for turning up in big matches and has given countless moments of magic on the pitch and probably none more memorable than his brutal assault on Stuart Broad in India's 2007 World T20 clash against England. The ICC on Thursday tweeted a video of Yuvraj's six sixes off that over with a simple caption reading "Happy Birthday".

For those in need of a reminder, India were batting first in the match and Yuvraj Singh came to the crease in the 17th over. In the penultimate over of the match, fired up after a confrontation with Andrew Flintoff, Yuvraj Singh tore into Stuart Broad. He sprayed the pacer all over the pitch, twice getting on his knees to slog the ball on the leg-side.

Watch that historic over here:

"A true champion and an inspiration to many, here's wishing @YUVSTRONG12 a very happy birthday," the Board of Control for Cricket in India tweeted.

A true champion and an inspiration to many, here's wishing @YUVSTRONG12 a very happy birthday#HappyBirthdayYuvi pic.twitter.com/bWtgnxbRyV

Virat Kohli led the wishes from the Indian cricket fraternity.

"Happy birthday brother @YUVSTRONG12 May waheguru bless you with all the happiness,love,peace and everything you want," Harbhajan Singh tweeted.

Yuvraj Singh has represented India in 308 ODIs, 58 T20Is and 40 Tests. He was also one of the star performers for India in their successful 2007 World T20 and 2011 World Cup campaigns.