How Jasprit Bumrah Is Keeping Himself Fit. Watch

Jasprit Bumrah shared a video on Instagram, giving his fans a glimpse of how he is maintaining his fitness. 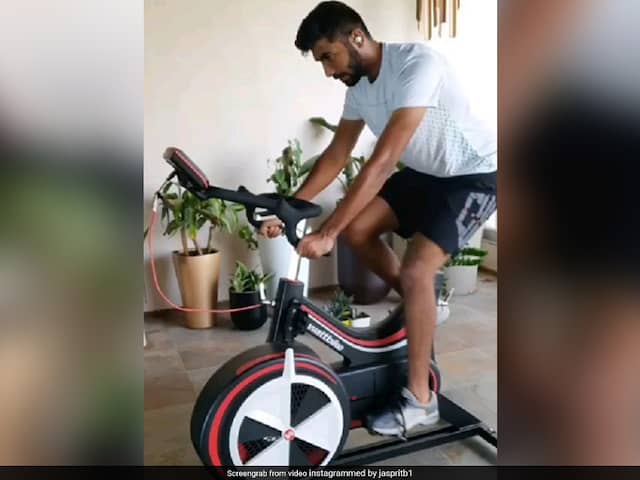 Jasprit Bumrah posted a video of him sweating it out on his Wattbike.© Instagram

Indian cricketers are currently cooling their heels with the coronavirus pandemic wreaking havoc on the sporting calendar. International cricket finally made a return on July 8 for the first time since March 2 following the coronavirus lockdown with England playing hosts to the West Indies in the first Test in Southampton. With cricket seemingly getting back on its feet, India's star pacer Jasprit Bumrah is keeping himself in top shape. The fast bowler shared a video on Instagram, sweating it out on his Wattbike.

Great session on my @wattbike this morning @grandslamfitness

The Indian pacer was expected to be a key part of Mumbai Indians' Indian Premier League (IPL) title defence but with the coronavirus crisis bringing the world to its knees, the tournament too suffered dearly and had to be postponed indefinitely.

Bumrah may still be seen in MI colours if the BCCI gives the go ahead but it all hinges on what decision the International Cricket Council (ICC) will take in regards to the T20 World Cup, scheduled to take place in Australia in October-November.

The world governing body had said that it would take a call on the T20 World Cup this month, but no date for a meeting was announced. As of now. there is still no clarity on whether the tournament will take place but reports in the Australian media claimed last week that it is "all but certain" to be postponed.

Last month, Cricket Australia chairman Earl Edding said that it was "unrealistic" to hold the T20 World Cup "in the current world".

"While it hasn't been formally called off this year, or postponed, trying to get 16 countries into Australia in the current world, where most countries are still going through COVID spiking, I think it's unrealistic, or it's going to be very, very difficult," he had told reporters.