A brutal spell from Neil Wagner, including three wickets and a broken arm, led New Zealand to a comprehensive victory over the West Indies in Hamilton on Tuesday. 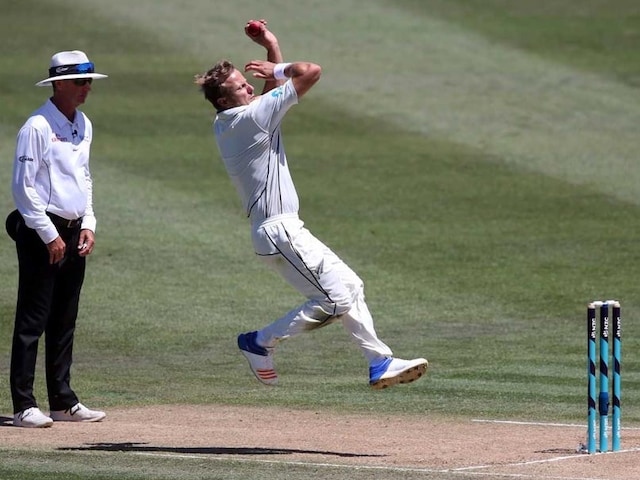 A brutal spell from Neil Wagner, including three wickets and a broken arm, led New Zealand to a comprehensive victory over the West Indies in Hamilton on Tuesday. The tourists, set a target of 444, folded to be nine for 203 at tea on day four with Sunil Ambris retired hurt and unable to continue batting. The 240-run victory saw a dominant New Zealand wrap up the series 2-0 after winning the first Test by an innings.

The hostile Wagner accounted for most of the damage in the second innings in Hamilton with his short-ball barrage targeting the body.

Ambris was taken to hospital after a vicious blow to the forearm.

He tried to struggle on and reached five before trudging from the field. It ended a tough Test baptism for Ambris who was twice dismissed in his first three innings by treading on his stumps.

Shai Hope, on 23, also required on-field medical attention after being hit on the forearm by a rising Wagner delivery.

When play resumed he attempted an ambitious hook at another short delivery and was caught by Colin de Grandhomme at long leg.

Shane Dowrich lasted two balls after Ambris left when he fended a Wagner bouncer to Henry Nicholls at short leg.

Roston Chase and Raymon Reifer manufactured a solid 78-run partnership until midway between the lunch and tea breaks when Chase, on 64, went in similar fashion to Hope, pulling a Wagner bouncer to the safe hands of de Grandhomme.

Reifer was out soon after for 29, edging a good ball from Tim Southee to give Williamson his second smart catch at gully, before Mitchell Santner cleaned up the last two wickets.

When the West Indies resumed the day at 30 for two they needed opener and captain Kraigg Brathwaite to knuckle down for a long innings.

But he was gone in the sixth over for 20, caught at gully off Trent Boult, giving the left-armer his 200th Test wicket.

The series now moves to three one-day internationals and three Twenty20s with the tourists to be reinforced with the inclusion of Chris Gayle and Marlon Samuels for all six matches while Andre Fletcher, Sunil Narine and Kieron Pollard will play the Twenty20s.

Comments
Topics mentioned in this article
New Zealand Cricket Team West Indies Cricket Team Neil Wagner Seddon Park, Hamilton Cricket
Get the latest Cricket news, check out the India cricket schedule, Cricket live score . Like us on Facebook or follow us on Twitter for more sports updates. You can also download the NDTV Cricket app for Android or iOS.