A record-equalling 17th century by Ross Taylor had New Zealand closing in on a series sweep against the West Indies after day three of the second Test in Hamilton. 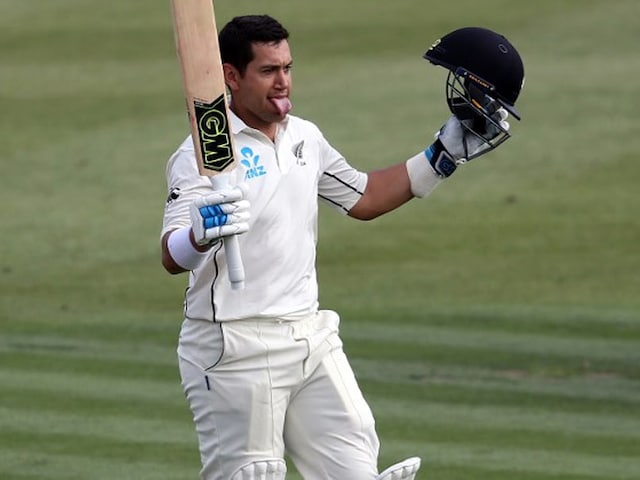 A record-equalling 17th century by Ross Taylor had New Zealand closing in on a series sweep against the West Indies after day three of the second Test in Hamilton on Monday. The West Indies, set a world-record target of 444 to win, were in trouble at 30 for two by stumps with two full days of play remaining. It was New Zealand's day as they shut down the West Indies for 221 to lead by 152 on the first innings. New Zealand declared their second innings at 291 for eight, with Taylor 107 not out, and then took two top-order wickets by stumps.

The 33-year-old, who offered two chances in an otherwise majestic innings, reached the milestone driving Raymon Reifer to the boundary for only the 11th four in his 198 ball innings.

Williamson was earlier out for 54 as he looked to lead New Zealand to a series sweep following the innings victory in the first Test.

The current record for a victorious fourth innings chase is 418, achieved 14 years ago when the West Indies reached the target against Australia for the loss of seven wickets.

Taylor did give chances in a near majestic innings, with a top edge from Miguel Cummins flying just out of reach of wicketkeeper Shane Dowrich and on 35 he was dropped in the gully by Shai Hope off Shannon Gabriel.

New Zealand were 263 for eight when Taylor brought up his hundred and with tailender Tim Southee (not out 22) plundering more boundaries they added a further 28 runs before declaring. The West Indies first innings folded quickly on the third morning with Trent Boult taking the last two wickets to fall in successive balls.

But he missed out on a hat-trick when the West Indies batted again -- needing a wicket first ball he removed Powell on his third delivery.

As New Zealand built on their lead, the West Indies continued to fight with Miguel Cummins reviving memories of a time when the calypso cricketers had seriously venemous bowlers.

He zipped the ball around the ears of the New Zealand batsmen in a short-pitched salvo mixed with full-length deliveries to have three for 69.

His scalps included Williamson for 54 when the New Zealand skipper could not get his bat down fast enough on a yorker the ripped out the middle stump.

It was Cummins first ball after lunch and followed his first ball caught and bowled dismissal of Jeet Raval for four in the morning session.

He returned to the short delivery to send off the inconsistent Henry Nicholls for five when an attempt to fend the ball away was taken by wicketkeeper Shane Dowrich.

Mitchell Santner had a life when an edge off Cummins burst through Dowrich's hands to the boundary, and he was hit on the helmet when he ducked into a ball that did not bounce as expected.

But when the short-pitched salvo ended it was spinner Roston Chase who accounted for Santner, caught at long-on for 26.

New Zealand were 190 for five at tea and declared three wickets later to have 40 minutes bowling at the West Indies before stumps.

Comments
Topics mentioned in this article
New Zealand Cricket Team West Indies Cricket Team Ross Taylor Seddon Park, Hamilton Cricket
Get the latest Cricket news, check out the India cricket schedule, Cricket live score . Like us on Facebook or follow us on Twitter for more sports updates. You can also download the NDTV Cricket app for Android or iOS.