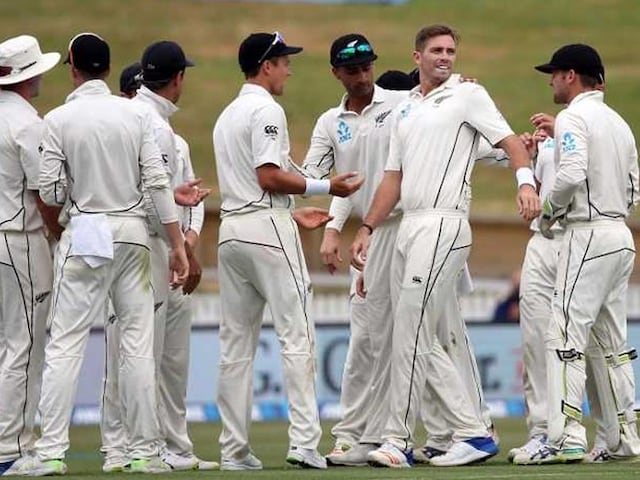 Tim Southee and Trent Boult took centre stage with bat and ball as New Zealand seized command on a rain-affected day two of the second Test against the West Indies in Hamilton on Sunday. They shared a 61-run last wicket stand to get New Zealand up to 373 in their first innings. The new ball pair then took four wickets between them on a benign pitch as the West Indies plummeted to 215 for eight at stumps. Southee has two for 34 and Boult two for 67. Raymon Reifer on debut was not out 22 with Miguel Cummins on 10.

Southee, unavailable for the first Test, capped his day with a stunning catch to remove Kraigg Braithwaite, the West Indies' top scorer with 66.

The 1.93 metre (6ft 4in) Southee leapt to get a hand to block an edge off Colin de Grandhomme, and then dived to get a hand under the ball just as it was about to hit the ground.

Play was interrupted for nearly 90 minutes by rain when the West Indies were 87 for two with Brathwaite and Shai Hope laying the foundations for a solid partnership.

But when play resumed, 20 minutes after the scheduled tea break, Hope only lasted six more balls before he was gone to end a 44-run stand and put the tourists into a tailspin that saw six wickets fall in the final session.

They included Sunil Ambris, out for two when he stepped back onto his stumps for the second time in only his third Test innings.

Bowler Boult shook his head and said "unbelievable" as Ambris hung his head and trudged back to the pavilion. Southee struck first in the opening over of the innings, taking the wicket of Kieran Powell without scoring, and Boult caught and bowled Shimron Hetmyer for 28.

Hope reached 15 off four scoring shots -- two fours, a six and a single -- when he was caught at first slip to give Southee his second wicket.

Roston Chase had no sooner brought up his 1,000th Test run than he was bowled by de Grandhomme with a ball that straightened and slipped between bat and pad.

Brathwaite was dropped on 14 by Tom Latham and an edge on 47 fell just short of Ross Taylor at first slip before being dismissed by a phenomenal piece of fielding from Southee.

The stand-in Calypso captain faced 116 balls and hit nine fours and a six.

Shane Dowrich had the second best score for the West Indies with 35, which included seven boundaries.

New Zealand had resumed the day at 286 for seven and lost Neil Wagner for one and Tom Blundell for 28 early before Southee and Boult opened up.

Mixing classic strokes with unorthodox cuts and pulls, Southee faced 39 balls for his 31 which included two sixes and a four.

Boult had two sixes and five fours in his 37 off 27 deliveries.

Shannon Gabriel was the most successful of the West Indies bowlers with four for 119 while Kemar Roach took three for 58.