Hardik Pandya Shares Photo Of Him "Chilling In The Clouds". See Pic

Hardik Pandya was "chilling in the clouds" as he posted a picture on social media where he is seen aboard an airplane. 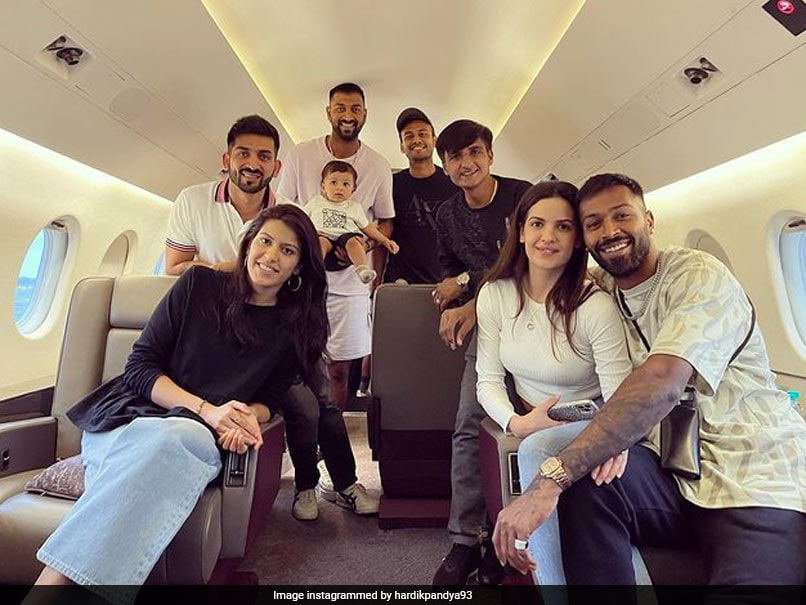 Hardik Pandya was seen with partner Natasa and friends in a photo he posted on Instagram.© Hardik Pandya/Instagram

Hardik Pandya posted a photo on social media where he is seen aboard an airplane and captioned it as "Chilling in the clouds". Hardik had also posted on social media platforms on Saturday, where he was seen with partner Natasa Stankovic, and brother and India teammate Krunal Pandya among others. Both Hardik and Krunal have been named in the new-look India squad for the three-match ODI and T20I series in Sri Lanka, set to be played in July. Neither of the Pandya brothers found a place in the Indian Test team picked for the tour of England where the team will play New Zealand in the World Test Championship final in June followed by a five-Test series against England in August-September.

The Board of Control for Cricket in India (BCCI) picked a second-string squad for India's limited-overs tour to Sri Lanka as several first-choice players are in England.

Shikhar Dhawan was named captain for both ODIs and T20Is while Bhuvneshwar Kumar was named Dhawan's deputy.

Hardik and Krunal were last seen in action during the Indian Premier League (IPL) 2021 where they turned out for Mumbai Indians.

The league is set to resume in September in the UAE, BCCI said after their last Special General Meeting (SGM). However, the dates for the remainder of the league are yet to be finalised.

All matches will be played at R Premadasa Stadium in Colombo.

Hardik Pandya Cricket
Get the latest updates on IND vs NZ 2021, check out the Schedule and Live Score . Like us on Facebook or follow us on Twitter for more sports updates. You can also download the NDTV Cricket app for Android or iOS.