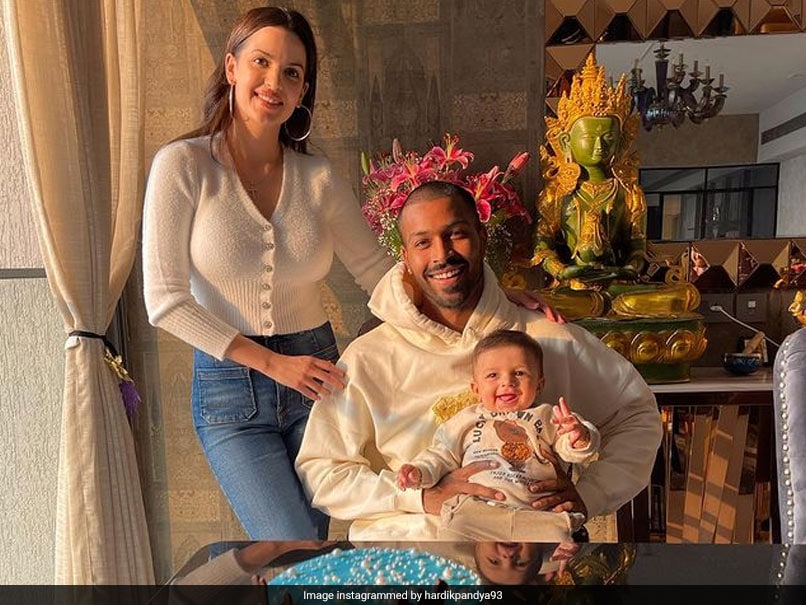 Hardik Pandya and Natasa Stankovic's son Agastya turned five-months old and the Indian all-rounder shared a picture celebrating the occasion on Instagram. Sharing a picture with his partner and son, the stylish all-rounder wrote: "5 months to our boy @natasastankovic__ we are so blessed". In the image Hardik can be seen sitting on a chair, with a smiling Agastya sitting on his lap and Natasa standing by his side posing for a wonderful family pic. Also in the picture was a designer cake, with a reindeer wearing a Santa Claus hat designed and "Happy 5 months Agastya" written in front.

Hardik became father on May 30 this year and couldn't spend much time with his boy as in less than a month's time he eft for the UAE to participate in the Indian Premier League (IPL) 2020. Mumbai Indians, led by Rohit Sharma, dominated the tournament and clinched their fifth IPL title. Hardik was one of the standout performers for the franchise, scoring quick-fire runs throughout the campaign.

After IPL ended on November 10, Hardik travelled to Australia for the limited-overs series, comprising three ODIs and as many T20Is. Playing as a specialist batsman, Hardik proved his worth and finished as top-run getter for India in the ODI series with 210 runs at a staggering average of 105.

Despite Hardik's contribution with the bat India lost the ODI series 2-1 but the visitors came strongly to clinch the T20I series with a similar margin, with Hardik once again scoring crucial runs at the death. Hardik was so impressive that he was adjudged the Player of the Series.

Hardik, not a part of India's Test squad, returned home and has since been spending quality time with his family. Recently, he shared pictures celebrating Christmas with his family, dressed in a Santa Claus outfit.