Hardik Pandya gave his Man of the Series award for the three-match T20I contest against Australia to T Natarajan. 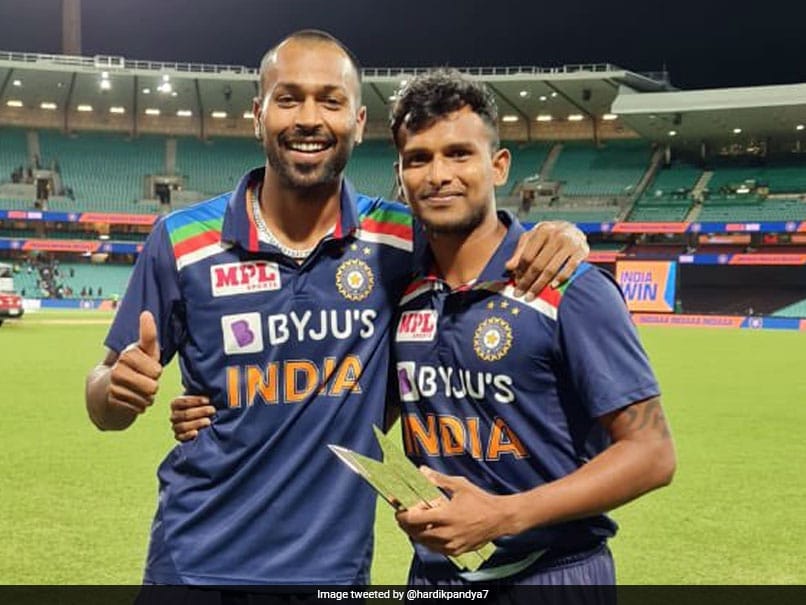 AUS vs IND: T Natarajan was the highest wicket-taker in the T20I series against Australia.© Twitter

Hardik Pandya won the Man of the Series award for the three-match T20 International contest against Australia. In a sweet gesture, the all-rounder dedicated it to T Natarajan, who impressed on his maiden T20I outing for India. In a high-scoring series dominated by batsmen, Natarajan playing his first T20I series for India finished as the highest wicket-taker with six scalps. The left-arm seamer was economical as well and gave India key breakthroughs when they needed them the most. Natarajan bowled at an economy of just 6.91 and registered his best figures of 3/30 in the second T20I.

"Natarajan, you were outstanding this series. To perform brilliantly in difficult conditions on your India debut speaks volumes of your talent and hardwork," Hardik wrote in a tweet after the third T20I, which Australia won by 12 runs. "You deserve Man of the Series from my side bhai!"

"Congratulations to #TeamIndia on the win," he concluded.

Natarajan, you were outstanding this series. To perform brilliantly in difficult conditions on your India debut speaks volumes of your talent and hardwork You deserve Man of the Series from my side bhai! Congratulations to #TeamIndia on the win pic.twitter.com/gguk4WIlQD

"Thank you brother," Natarajan wrote in response to Hardik's tweet.

"I want people to believe in themselves and to achieve anything even if odds are against them. It's just my way of appreciating his hard work over the years," Hardik Pandya told news agency ANI about why he handed the award to Natarajan.

"For me, Natarajan deserves the Man of the Series award. To perform so brilliantly on his debut speaks volumes of his belief and the talent he possesses," he added.

Natarajan was given a call-up to the Indian T20 side after an impressive outing in the Indian Premier League (IPL) 2020. He took 16 wickets in as many games to help SunRisers Hyderabad reach Qualifier 2 in the cash-rich league, before being knocked out by runners-up Delhi Capitals.

His efforts with the ball and Hardik's with the bat played a big role as India beat Australia 2-1 in the series after Australia beat the visitors in the ODI series.

The two teams will now face off in a four-match Test series.

Hardik Pandya T Natarajan Suryakumar Yadav Cricket
Get the latest updates on IPL Auction 2023 and check out  IPL 2023 and Live Cricket Score. Like us on Facebook or follow us on Twitter for more sports updates. You can also download the NDTV Cricket app for Android or iOS.