Virat Kohli, who is currently vacationing in Switzerland with his wife Anushka Sharma, posted a video on Instagram to wish his fans a "Happy New Year". 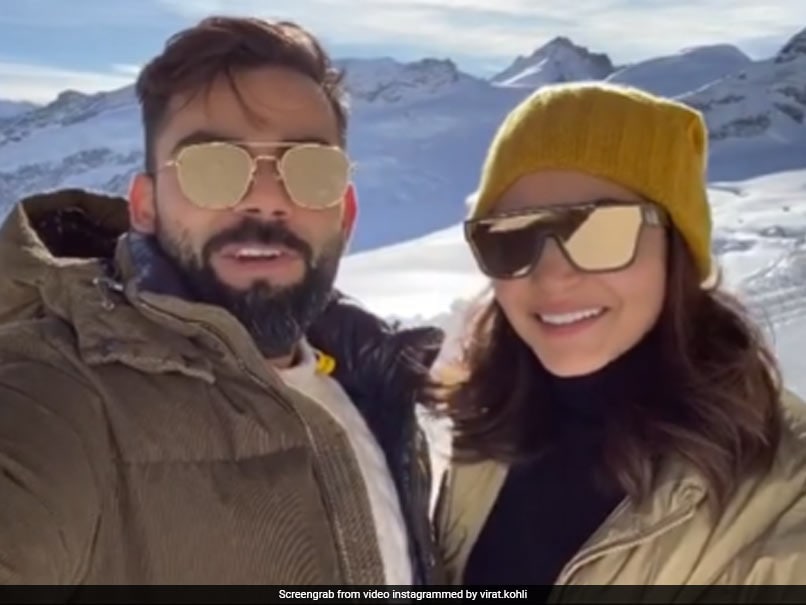 Virat Kohli and Anushka Sharma are vacationing in Switzerland.© Instagram

Virat Kohli, who is currently vacationing in Switzerland with his wife Anushka Sharma, posted a video on Instagram to wish his fans a "Happy New Year". "Happy new year from us to each and every one of you. God bless you all," Kohli captioned the video on Instagram. Virat Kohli and Anushka Sharma recorded the video atop a "beautiful glacier". The video shows both of them standing on a mountain, covered with heavy snow. Earlier in the day, Kohli had also shared a picture of himself and credited his "best photographer" wife for the amazing click. "No stress about pictures when you've got the best photographer taking them for you @AnushkaSharma," Kohli captioned the picture on Twitter. It is also one of the many pictures Virat Kohli has posted from his vacation in Switzerland with Anushka Sharma.

Happy new year from us to each and every one of you. God bless you all.

Virat Kohli, who spends the majority of his time playing cricket, never forgets to take some time  out and go on a vacation with his actress wife. The Indian skipper after a busy first six months, was given a much-needed break by the selectors during India's Twenty20 International (T20I) series against Bangladesh.

Kohli had utilised that short time by visiting Bhutan and accompanying him on the trip was none other than wife Anushka Sharma. During their stay there, Kohli also celebrated his 31st birthday.

Earlier this month, Kohli and Anushka, who got married in December last year, celebrated their second marriage anniversary.

After ending the year on a high by beating the West Indies in both T20I as well as One-day International (ODI) series, Kohli has once again gone on a holiday, only this time to a much farther location -- Switzerland.

The Indian team will be back in action in the first week of January when they host Sri Lanka for three T20Is, starting January 5. After the Sri Lanka series, India will play three ODIs against Australia at home before heading to New Zealand on over a month-long tour where they will play five T20Is, three ODIs and two Tests.