In the 78th over of the innings, Stuart Broad pulled off a one-handed stunner to dismiss Kagiso Rabada in the ongoing Lord's Test 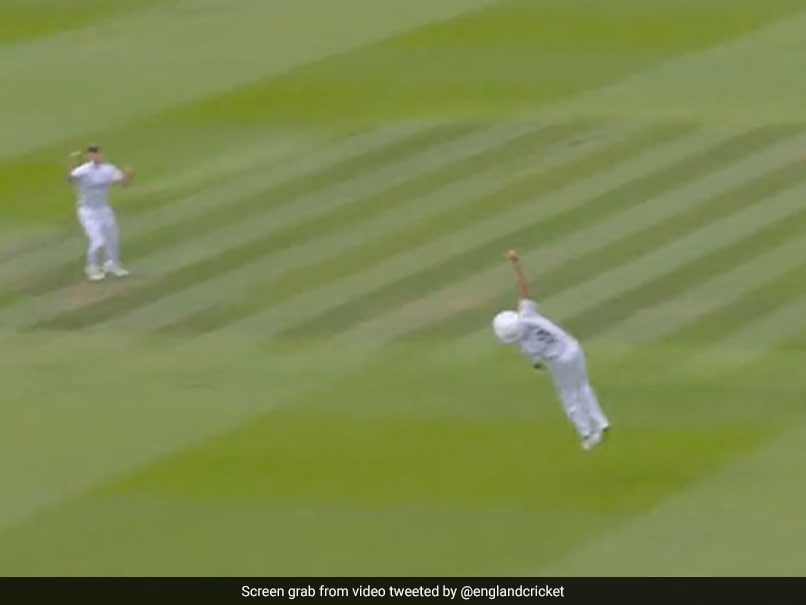 Dean Elgar-led South Africa are completely dominating the ongoing Lord's Test against England as they managed to take their lead past the 120-run mark. On the third day, England were in need of some quick wickets, and the hosts got the much-needed breakthrough in the very first over of the day, and it was due to the brilliance of Stuart Broad who was positioned at mid-on. In an over bowled by Matthew Potts, on the third delivery, Broad plucked the ball out of thin air to send Rabada packing.

Potts had bowled a short delivery, and Rabada decided to take it on and he pulled the ball. Broad, leapt up in the air and he took a one-handed ripper at mid-on to dismiss Rabada. After taking the catch, Broad was as surprised as the rest of his teammates.

England's skipper Ben Stokes was visibly chuffed, and was seen hugging Broad tight and not letting him go.

On Day 2, South Africa held an edge over England after extending their lead to 124. England were bundled out for 165 in the first innings as Kagiso Rabada scalped five wickets, and then South Africa reached score of 289/7 at stumps.

However, England captain Ben Stokes gave it his all on the second day, and he bowled a fiery spell, with a barrage of bouncers, and this helped him return with three wickets.

Earlier, England were bundled out for 165 with Ollie Pope top-scoring with a knock of 73.

Stuart Broad Matthew Potts Cricket
Get the latest updates on India vs South Africa and check out  Schedule, Results and Live Score. Like us on Facebook or follow us on Twitter for more sports updates. You can also download the NDTV Cricket app for Android or iOS.