Pakistan coach Mickey Arthur believes his "fearless" side have everything to gain when they face an "under the pump" England in the first Test at Lord's on Thursday. 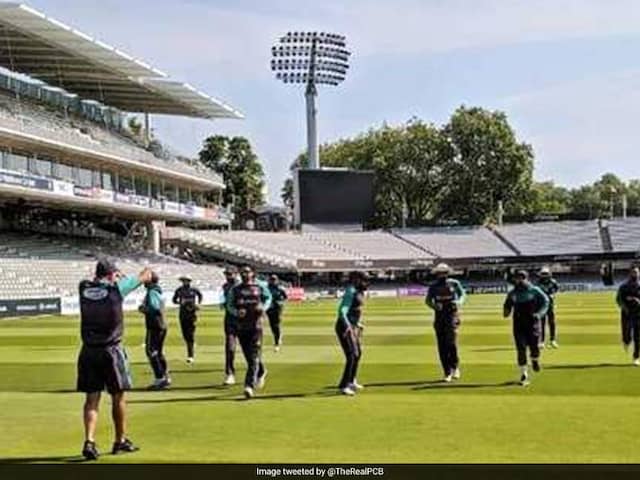 Arthur believes Pakistan are fitter now than when he took over two years ago and more aggressive with it.© Twitter

Pakistan coach Mickey Arthur believes his "fearless" side have everything to gain when they face an "under the pump" England in the first Test at Lord's on Thursday. England will be looking for some much-needed home comfort after recent winless Test tours of Australia and New Zealand extended their poor away record in cricket's longest format to 13 matches without a victory. Pakistan, by contrast, enter this two-match campaign on the back of a morale-boosting five-wicket win over Test debutants Ireland at Malahide last week.

"We haven't come here not to win," Arthur told reporters at Lord's on Tuesday.

"It's a changing room full of very, very skilled cricketers, very young cricketers, fearless cricketers. If we get the breaks and things go our way, they will certainly put England under pressure."

England, in their first Test since Ed Smith became their new head selector, continue to have doubts over a batting order where captain Joe Root has been promoted to number three, wicket-keeper Jonny Bairstow to five and Jos Buttler recalled at seven.

And with Jack Leach injured, England could give a Test debut to his fellow Somerset spinner Dominic Bess.

"In their home conditions, England are a different team to England abroad," said Arthur. "We've had a look obviously at Buttler, he adds an attacking side to England."

Two years ago, England were held to a 2-2 home draw by Pakistan in a four-Test series.

Since then veteran batsmen Misbah-ul-Haq and Younis Khan have both retired, with Pakistan hoping the likes of Azhar Ali and Asad Shafiq can fill the void.

But it is Imam-ul-Haq, the nephew of Pakistan selection chief and former Test batsman Inzamam-ul-Haq, who has made three fifties from as many games this tour -- including a match-clinching innings against Ireland.

"He's a totally different character to Inzi," said Arthur of Imam, a 22-year-old left-handed opener, who is somewhat quicker between the wickets than his celebrated uncle.

"He played beautifully for us, under pressure, against Ireland in his Test debut."

Arthur believes Pakistan are fitter now than when he took over two years ago and more aggressive with it.

"We are an incredibly fit unit. The guys have trained unbelievably hard, not that we weren't coming in 2016 but that was the start of almost the fitness regime," he said.

"The brand of cricket we are playing is certainly more attacking. We felt we needed to change with the times and get another bowler in," the former South Africa and Australia coach explained of a side captained by wicket-keeper Sarfraz Ahmed.

Much could depend on Pakistan left-arm quick Mohammad Amir, who has enjoyed Test success and a Champions Trophy triumph in England, as well as a 2017 County Championship title with Essex, since his career was almost ended by his involvement in a spot-fixing scandal at Lord's during the 2010 tour.

If the 20-year-old Bess plays he won't be the youngest slow bowler in the match, with 19-year-old Pakistan leg-spinner Shadab Khan replacing the injured Yasir Shah.

England appear set to decide between seam-bowling all-rounder Chris Woakes and injury-prone fast bowler Mark Wood for the last place in their XI, with one of pacemen Rahat Ali or Hasan Ali dropped from Pakistan's 12-man squad.

"There will be an Ali playing!" joked Arthur.

Meanwhile Buttler was well aware of the threat posed by Pakistan, whose last Test at Lord's saw them beat England by 75 runs.

"They've lost some experience, but as we saw in the Champions Trophy, Pakistan are a very strong side," he said.

England will field a trio of Test veterans in opener Alastair Cook and the new-ball duo of Stuart Broad and James Anderson.

"With all that comes a lot of responsibility and accountability," said Arthur. "A couple are under the pump.

"Our guys don't fear that at the moment. They are looking to grab the opportunity with both hands.

"I just hope they do because if they do it solidifies exactly what we want to do with Pakistan cricket."

Comments
Topics mentioned in this article
England Cricket Team Pakistan Cricket Team Cricket Lord's, London Mickey Arthur Sarfraz Ahmed Joe Root
Get the latest updates on IPL 2020, check out the IPL Schedule for 2020 and Indian Premier League (IPL) Cricket live score . Like us on Facebook or follow us on Twitter for more sports updates. You can also download the NDTV Cricket app for Android or iOS.