Opting to bat, India C rode Virat Singh's 76 and bowling all-rounder Axar Patel's unbeaten 98 to put a decent score on the board. 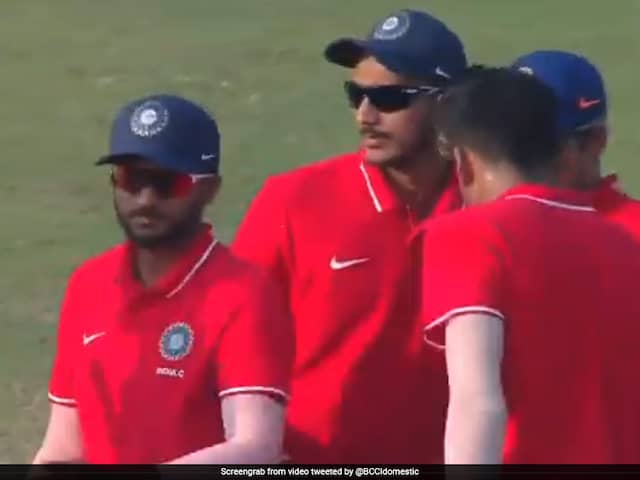 India C outclassed India B by a huge margin of 136 runs in a Deodhar Trophy tie.© Screenshot of the video shared by @BCCIdomestic

India C outclassed India B by a huge margin of 136 runs in a Deodhar Trophy tie at the JSCA International Stadium in Ranchi on Saturday. Chasing a target of 281, India B suffered a batting collapse as only an in-form Baba Aparajith was the top scorer with a 90-ball 53-run knock. Opting to bat, India C rode Virat Singh's 76 and bowling all-rounder Axar Patel's unbeaten 98 to put a decent score on the board. Apart from them, skipper Dinesh Karthik also chipped in with 34 runs for his side.

Local boy Shahbaz Nadeem was the pick of the bowlers for India B with a decent figure of 2/37 from his nine overs while Vijay Shankar, Mohammed Siraj and Nitish Rana picked up a wicket each.

In reply, no other batsman other than Aparajith showed resistance against their opponents as the India B side's batting line-up fell like a pack of cards and they were bundled out for just 144 runs in 43.4 overs.

Mayank Markande starred with the ball for India C with 4 wickets from his 10 overs while Jalaj Saxena and Ishan Porel bagged two wickets apiece.

Both the sides will now meet in the final of the tournament at the same venue on Monday.