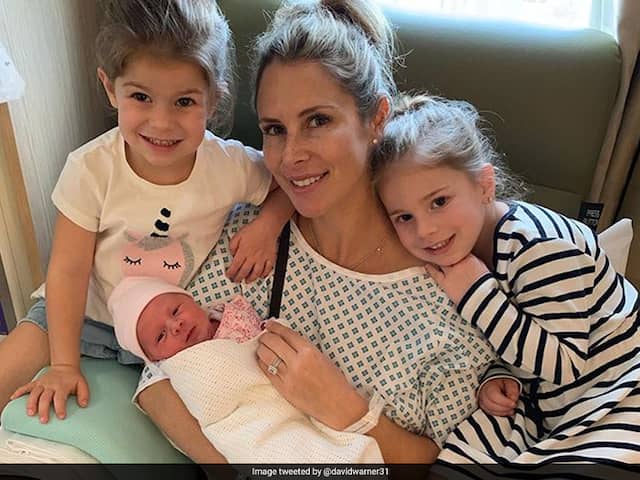 Candice Warner gave birth to a girl on Sunday in London.© Instagram

David Warner took to social media to announce the arrival of his third child, another daughter. Warner posted a picture of his wife Candice and the kids on his Instagram account. Candice Warner gave birth to a girl in London on Sunday. The 32-year-old David Warner recently told Cricket Australia that he loves spending time with family whenever he gets the chance. "I just love being a father. I've got a great, supportive wife, a great family base at home as well. We've got great support around us, the guys here have been fantastic, they've really got around me at this important time for my family." Warner was quoted as saying by Cricket Australia last week.

In his post, the left-hander wrote "We welcomed our newest family member Isla Rose Warner at 10:30pm late last night. @candywarner1 was absolutely amazing. Mum and Bub doing very well and her big sisters are over the moon."

We welcomed our newest family member Isla Rose Warner at 10:30pm late last night. @candywarner1 was absolutely amazing. Mum and Bub doing very well and her big sisters are over the moon. #prouddad

Warner has had a tough last year after the ball-tampering scandal and according to a recent report by cricket.com.au, Candice suffered two miscarriages when David was serving the ban.

"It was unfortunate we had two miscarriages during that time and we would have had one (baby) before this but that's just what happens and I'm looking forward to obviously the baby coming out and then still concentrating on cricket," Warner was quoted as saying by news.com.au.

David Warner has been in terrific form in the ongoing World Cup 2019. He is leading the top run scorers' list with 516 runs in eight matches so far. Australia have already qualified for the knockout phase of the tournament and they will play their last league match against South Africa on sixth July.

Australia Cricket Team
Get the latest Cricket news, check out the India cricket schedule, Cricket live score . Like us on Facebook or follow us on Twitter for more sports updates. You can also download the NDTV Cricket app for Android or iOS.