Watch: Curtis Campher Runs Out Will Young With A Terrific Throw During Ireland's 3rd ODI vs New Zealand

On the second ball of the 13th over, Young drove a half-volley for a quick single but Curtis Campher's brilliance cut his innings short. 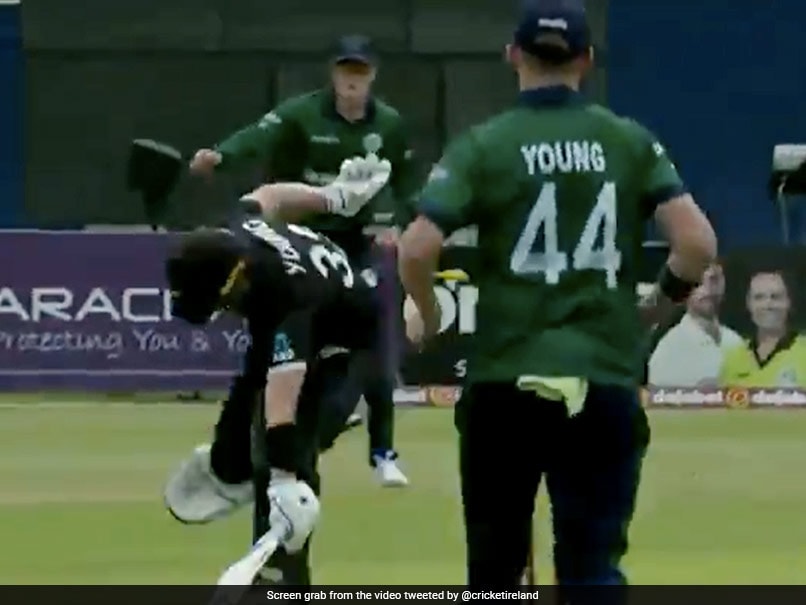 New Zealand batter Will Young was dismissed on 3 runs in the third ODI against Ireland.© Twitter

New Zealand on Friday defeated Ireland in a last-ball thriller in the third ODI at The Village, Dublin. With the win, the Blackcaps whitewashed the hosts 3-0 in the series. The last match that went down the wire saw New Zealand winning it by a margin of one run. Though Ireland eventually lost the match, they put up an amazing fight in chase of a 361-run target set by the guests. They almost won the match, needing 10 runs off the final over but New Zealand's Blair Tickner held his nerves well to bag the match for his side.

While it was the Ireland batters who performed in the second innings of the match, their fielders did a commendable job in the first innings, especially Curtis Campher, who effected a run-out to cut short the innings of New Zealand batter Will Young.

On the second ball of the 13th over, Young drove a half-volley to the right of extra-cover fielder Campher for a quick single but he failed to reach the other end in time as Campher ran to his right, picked the ball from his right hand and hit the bulle's eye at the non-striker end. Young departed for a on 3 runs.

Talking about the match, New Zealand posted 360/6 batting first. Martil Guptill scored 115 while Henry Nicholls also helped the team's cause with a 79-run knock. In reply, Ireland were limited to 359/9 in their stipulated quota of 50 overs, despite centuries from Paul Stirling (120) and Harry Tector (108).

New Zealand and Ireland will resume their contest with a three-match T20I series, starting on Monday.

Paul Stirling Harry Tector
Get the latest updates on IPL Auction 2023 and check out  IPL 2023 and Live Cricket Score. Like us on Facebook or follow us on Twitter for more sports updates. You can also download the NDTV Cricket app for Android or iOS.