Cricketer Sheldon Jackson posted a video of a little puppy being fed and fans were floored. 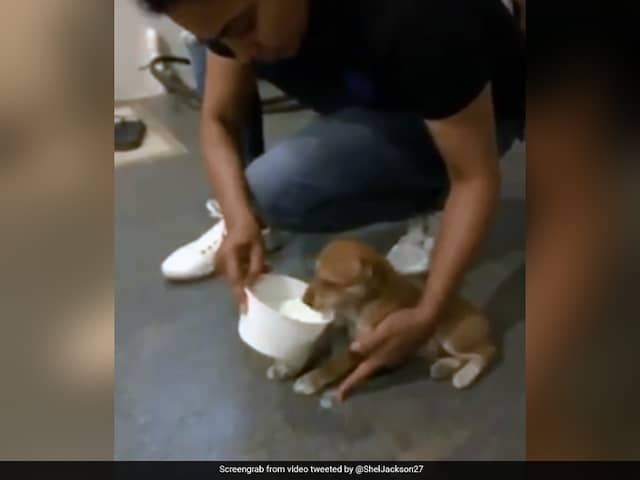 Sheldon Jackson posted a video of the stray puppy being fed some milk.© Twitter

Indian first-class cricketer Sheldon Jackson has won over fans on social media platform Twitter after coming to the aid of a stray puppy that he said was in distress. Sheldon Jackson, who has played for Kolkata Knight Riders in the Indian Premier League (IPL) and is a key member of the Saurashtra side that reached the Ranji Trophy final this year, took to Twitter to post a couple of videos in which the stray puppy is seen being given milk and receiving some medical attention.

"Sometimes little things make a difference in the life of someone. Found this stray puppy in distress," Sheldon Jackson captioned the first video, tagging PETA India in the post.

Sometimes little things make a difference in the life of someone. Found this stray puppy in distress. @PetaIndia pic.twitter.com/Utit96zIL0

"We took him to a doctor and got some vaccinations done. I request everyone to pls help the strays who need us," read the caption for the second video in which the puppy is being checked by a veterinarian.

We took him to a doctor and got some vaccinations done. I request everyone to pls help the strays who need us. @PetaIndia pic.twitter.com/euqgwkYdG1

Fans on Twitter applauded the Indian cricketer for his noble act.

Wow!! What a great deed!! Continue more of this kind brother and we can make the society a better place!!

Bro great work... Highly appreciated.. Could u find its mom around. Such puppies just get separated from family wandering here n there.. Best Wud be try to locate its family..

He has also taken 48 catches and two stumpings in first-class cricket.

Sheldon Jackson made his debut for Saurashtra in December 2011. In the 2012-13 Ranji Trophy season, he made four fifties and three hundreds, including back-to-back tons in the quarter-final and semi-final against Karnataka and Punjab respectively, to help Saurashtra qualify for the final for the first time.

However, this Ranji Trophy season has been the best yet for Sheldon Jackson. He was Saurashtra's highest run-getter this season with 854 runs in 11 matches at an average of 47.44, including two centuries and seven fifties.

Jackson's form was instrumental in Saurashtra reaching the Ranji final again but it wasn't to be as Vidarbha became only the sixth team in history to successfully defend a Ranji Trophy title.

Kolkata Knight Riders Sheldon Jackson Cricket
Get the latest Cricket news, check out the India cricket schedule, Cricket live score . Like us on Facebook or follow us on Twitter for more sports updates. You can also download the NDTV Cricket app for Android or iOS.