Hasan Ali had earlier posted a picture on Twitter, marking his "last night as a bachelor". 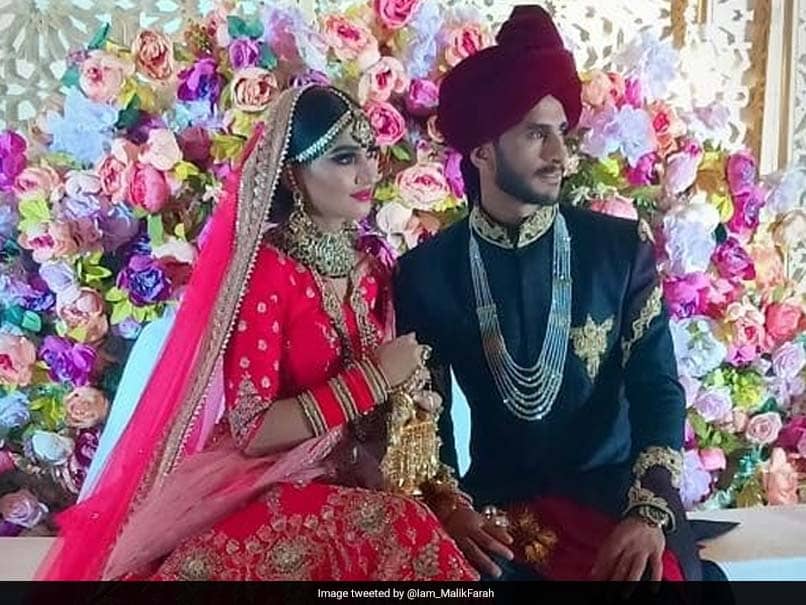 Hasan Ali had even invited cricketers from India for his wedding ceremony.© Twitter

Pakistan fast bowler Hasan Ali married Indian national Shamia Arzoo in Dubai on Tuesday. Fans flooded social media with Hasan Ali's wedding photos and videos within no time. The 25-year-old cricketer had shared a picture of himself on the "last night as a bachelor". Hasan Ali also shared a video of his "mehndi night" in the middle of the desert, where he was seen doing his signature wicket-taking celebration. "Hassan Ali doing his wicket-taking celebration at a desert safari ahead of his Mehndi today," Pakistani journalist Saj Sadiq captioned the video on Twitter.

Hassan Ali doing his wicket-taking celebration at a desert safari ahead of his Mehndi today pic.twitter.com/J37jZySDOk

Replying to Hasan Ali's tweet, Indian tennis star Sania Mirza congratulated the Pakistan cricketer and made a special request. "Congratulations Hassan wish you both a lifetime of love and happiness .. this time you'll have to treat us to more than Nandos though," wrote Sania Mirza, who is married to Pakistan all-rounder Shoaib Malik.

Congratulations Hassan wish you both a lifetime of love and happiness .. this time you'll have to treat us to more than Nandos though https://t.co/CEXysWNv4F

As reported earlier, Shamia, 26, is from Haryana. She is a flight engineer with Emirates Airlines, while her family members are settled in New Delhi.

Hasan Ali has now become the fourth Pakistani cricketer to get married with an Indian girl, after Zaheer Abbas, Mohsin Khan and Shoaib Malik.

However, his form and stock has plummeted in the past few years. The 25-year-old struggled at the World Cup in England and Wales and was dropped from the playing eleven midway through the tournament.

Hassan Ali Cricket
Get the latest updates on India vs Australia Series, check out the India vs Australia Schedule for 2020-21 and Ind vs Aus live score . Like us on Facebook or follow us on Twitter for more sports updates. You can also download the NDTV Cricket app for Android or iOS.