Cheteshwar Pujara Birthday: Virat Kohli was among the first to wish the Test star on his special day while the BCCI serenaded him with a small verse to hail his resilience. 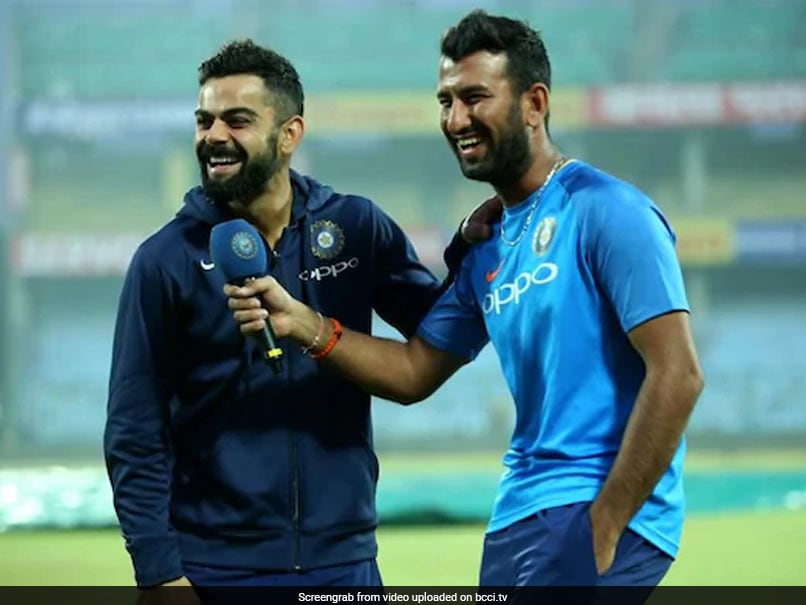 Cheteshwar Pujara turned 33 on Monday with wishes pouring in for India's masterful batsman on social media. India's cricket captain Virat Kohli was among the first to wish the Test star on his special day. The Board of Control for Cricket in India (BCCI) shared a video link to one of Pujara's finest hundreds -- a knock of 143 against Sri Lanka in Nagpur. The BCCI also serenaded Cheteshwar Pujara with a small verse to hail his resilience. Many cricketers and fans took to Twitter as well to tip their hat to India's batting star, who had played a crucial role in the team's historic Test series triumph in Australia recently.

"Happy birthday pujji @cheteshwar1. Wish you good health, happiness and more hours at the crease. Have a great year ahead," tweeted Virat Kohli.

Happy birthday pujji @cheteshwar1. Wish you good health, happiness and more hours at the crease. Have a great year ahead.

"He takes body blows. Grinds it out in the middle. Braves it all & stands tall," tweeted the BCCI along with Pujara's Test batting stats.

Let's relive one of his fine tons against Sri Lanka

Former India pacer RP Singh saluted Pujara in his birthday wish, pointing to the fact that the batting star was the "only 'common factor' in back to back series wins in Australia".

The only 'common factor' in back to back series wins in Australia! #HappyBirthdayPujara You have proved to the new generation that not only quality of runs but spending quality time at crease is as important. Have a great year ahead #CheteshwarPujara @cheteshwar1 pic.twitter.com/dvQU08hdFc

Other cricketers and fans too came in large numbers to extend their birthday greetings for Pujara.

Happy birthday @cheteshwar1! They don't make them like you anymore. #HappyBirthdayPujara pic.twitter.com/DfUMVwWRNR

One of the greatest test player in modern-day test cricket

Deliberately taking body blows when a bowler is bowling at 145+ kmph on a bouncy track is a next level stuff .

#BirthdayWishes to Cheteshwar Pujara. Your unwavering dedication, #patience & level of concentration are benchmarks for cricketers around the world. Wish you all the very best for the future & I hope we keep seeing your delightful batting. #CheteshwarPujara @cheteshwar1 @BCCI pic.twitter.com/2eH9Tq6Iwf

While Pujara failed to hit a century in Australia, he played some crucial knocks when India needed it most to grind down the Australian bowlers. He played the perfect foil to more attacking batsmen like Rishabh Pant as India breached Australia's fortress Gabba to secure a 2-1 series win.

No visiting team in the last 32 years had ever won at the Gabba, before India came knocking. Ravaged by injuries, the Indian team handed multiple debuts, and few gave the inexperienced outfit to do anything of note.

Led brilliantly by Ajinkya Rahane, and supported by the ever-present Pujara, India's young guns stood tall pulled of one of the biggest wins in Test history to leave the hosts shell-shocked.

Virat Kohli Rudra Pratap Singh BCCI Cricket
Get the latest updates on India vs South Africa and check out  Schedule, Results and Live Score. Like us on Facebook or follow us on Twitter for more sports updates. You can also download the NDTV Cricket app for Android or iOS.