Birthday Wish For VVS Laxman, Virender Sehwag Style. He Also Has A Song In Mind

The Delhi and Districts Cricket Association (DDCA) on Tuesday named Gate No. 2 of the Feroz Shah Kotla Stadium as the 'Virender Sehwag Gate'. 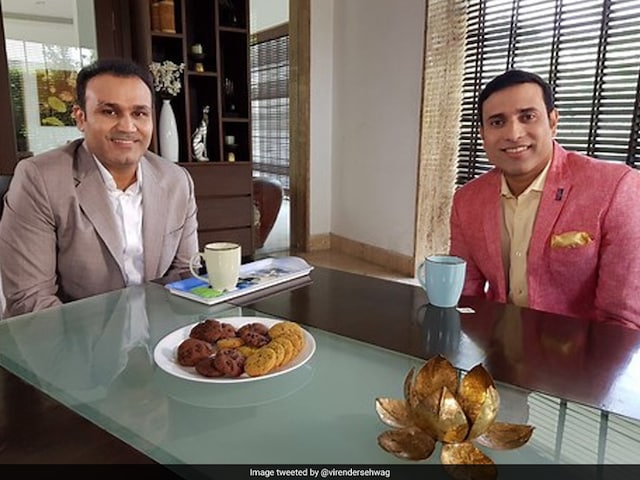 Virender Sehwag and VVS Laxman are now teammates in the commentary box.© Twitter

Virender Sehwag was at it again on Wednesday as he wished former teammate and birthday boy VVS Laxman in his trademark style on Twitter. Known for his wit and sarcasm on the social media platform, Sehwag did not disappoint his fans and followers on this 'very very special' occasion. "Wishing #WristJaadugar & Bhrata Shri @VVSLaxman281 a very happy birthday.Can calm any situation with a flick of his wrists.Chitiyan Kalaiyan," Viru tweeted. "Thank you very much for your wishes, Viru," was Laxman's reply.

?? Thank you very much for your wishes, Viru ! https://t.co/k5jGVsEJym

Sehwag's reference to a popular Bollywood song had most of his fans and followers in splits.

The Delhi and Districts Cricket Association (DDCA) on Tuesday named Gate No. 2 of the Feroz Shah Kotla Stadium as the 'Virender Sehwag Gate'.

Laxman was among the several cricketers who congratulated the Delhi batsman.

To remember history of India, Delhi has India gate, and now to remember a legend of the game, @virendersehwag Gate. Richly deserved Viru ! pic.twitter.com/qZFUBziQZM

"It's an honour to have a gate named after me at Ferozshah Kotla Stadium. I remember when I started off I used to daily cross this gate and now it has my name," Sehwag told reporters.

Thanking the Delhi and District Cricket Association (DDCA), the cricketer-turned-commentator said: "There will be many more cricketers from this state who will have stands, gates, pavilions named after them but I am glad that I am the first one. I feel very fortunate and would like to thank the DDCA for this honour."

Comments
Topics mentioned in this article
India Cricket Team VVS Laxman Virender Sehwag Cricket
Get the latest Cricket news, check out the India cricket schedule, Cricket live score . Like us on Facebook or follow us on Twitter for more sports updates. You can also download the NDTV Cricket app for Android or iOS.