Watch: Batsman Uses His Head To Deal With Short Ball

Leicestershire batsman Mark Cosgrove used his head to negotiate a short ball away towards the first slip during a county match against Durham. 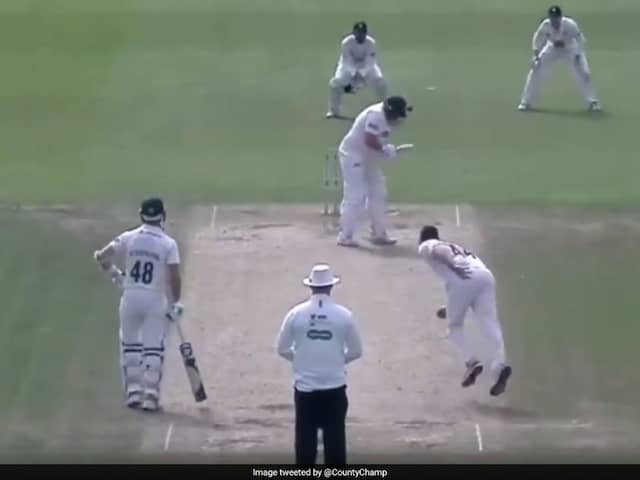 Mark Cosgrove headed the short ball away towards the first slip during a county championship game.© Twitter

A county championship match between Leicestershire and Durham saw Australian left-handed batsman Mark Cosgrove find a unique way to tackle the short ball. When Durham bowler Ben Raine bowled a short delivery to Cosgrove, the 35-year-old headed the ball away towards the first slip instead of leaving or ducking under the ball. County Championship's official Twitter handle posted a video of the funny incident on Wednesday. "Who's the better header of a ball, @cozzie99 or @HarryMaguire93," the tweet read.

Who's the better header of a ball, @cozzie99 or @HarryMaguire93? pic.twitter.com/6hjTqMvSX1

Short balls have been one of the most talked about topics in world cricket ever since Jofra Archer hit Steve Smith on the back of his neck that forced the former Australia captain to leave the second Ashes Test midway.

Smith was batting on 80 when he turned his head away from a bouncer from Archer that was bowled at 92.4 mph. The 30-year-old, Smith fell on the ground and received medical assistance after which he was taken off the field.

Smith came back to bat after the fall of Peter Siddle's wicket and scored three boundaries before Chris Woakes got him with an in-swinger.

In the county match, Leicestershire were trailing Durham by 88 runs at Lunch on the final day of the match. Durham scored 544/9 in their first innings and Leicester were bowled out for 236, before being asked to follow-on.

Leicestershire have seven wickets in hand with two sessions remaining in the day at Chester-le-Street on Wednesday.

Jofra Archer
Get the latest Cricket news, check out the India cricket schedule, Cricket live score . Like us on Facebook or follow us on Twitter for more sports updates. You can also download the NDTV Cricket app for Android or iOS.
Advertisement