Ball-Tampering Scandal: "Will Regret This All My Life," Says Steve Smith

Australian captain Steve Smith on Thursday said he takes the full responsibility of the ball-tampering scandal. Steve Smith broke down during the press conference in Sydney.© AFP

Distraught Australian cricketer Steve Smith accepted full responsibility for a ball-tampering scandal that has shaken the sport, saying he was devastated by his "big mistake". While addressing the media in Sydney, Smith said: "I take full responsibility ... There was a failure of leadership, of my leadership. I'll do everything I can to make up for my mistake and the damage it's caused." Smith along with David Warner and the young opener Cameron Bancroft were handed bans by Cricket Australia over a ball-tampering scandal that has left their careers in tatters.

"If any good can come of this, if there can be a lesson to others then I hope I can be a force for change. I know I'll regret this for the rest of my life. I'm absolutely gutted. I hope in time I can earn back respect and forgiveness," Smith said.

"Cricket is the greatest sport in the world. It's been my life and I hope it can be again. I'm sorry and I'm absolutely devastated," a devastated Smith said.

"I don't blame anyone. I'm the captain of the Australian team. It's on my watch and I take responsibility for what happened last Saturday," he said.

Smith broke down during the conference and said: "I'm deeply sorry. I love the game of cricket. I love entertaining young kids ... I just want to say sorry for the pain I've brought to Australia, to the fans and the public". 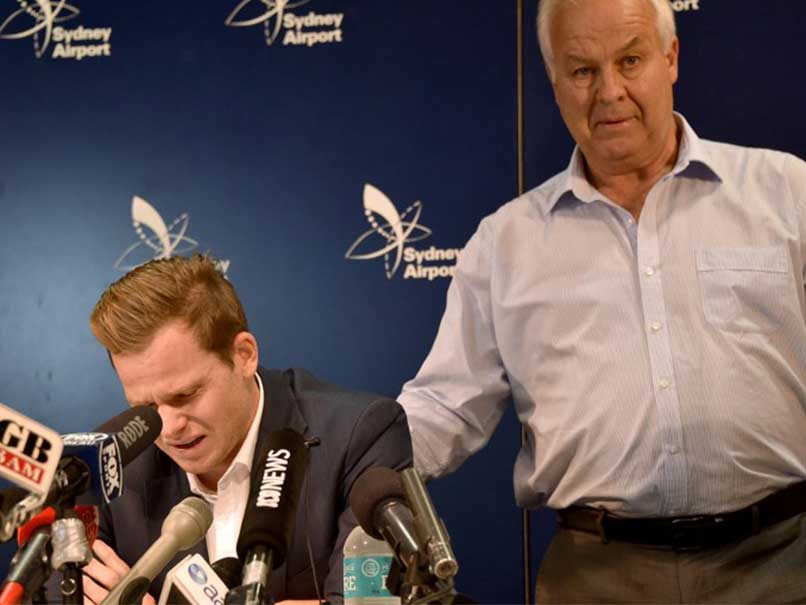 Steve Smith is comforted by his father Peter during the press conference.
Photo Credit: AFP

Smith, who once touted as next Don Bradman, also faced humiliating scenes on Wednesday as he had to face boos and cries of "cheat" while making his way through Johannesburg airport. The 28-year-old was surrounded with many security officials who were seen holding Smith's arms.

Smith and Warner was on Wednesday banned from cricket for 12 months. Bancroft was slapped with nine months ban by Cricket Australia.

While Warner, who was the vice-captain of the Australian team, will not be considered ever for the leadership role of the national team, Smith and Cameron Bancroft would not be picked for captaincy until a minimum of 12 months after the end of their suspensions, Cricket Australia (CA) said in a statement.

All three players will also be required to undertake 100 hours of voluntary service in community cricket.

Comments
Topics mentioned in this article
Australia Cricket Team Steven Smith Cricket
Get the latest updates on ICC T20 Worldcup 2022 and CWG 2022 check out the Schedule, Live Score and Medals Tally. Like us on Facebook or follow us on Twitter for more sports updates. You can also download the NDTV Cricket app for Android or iOS.