Australia vs Pakistan: Shoaib Akhtar mocked Pakistan's top-order batsmen for their flop show and thanked Yasir Shah for showing them how to bat in tough situation. 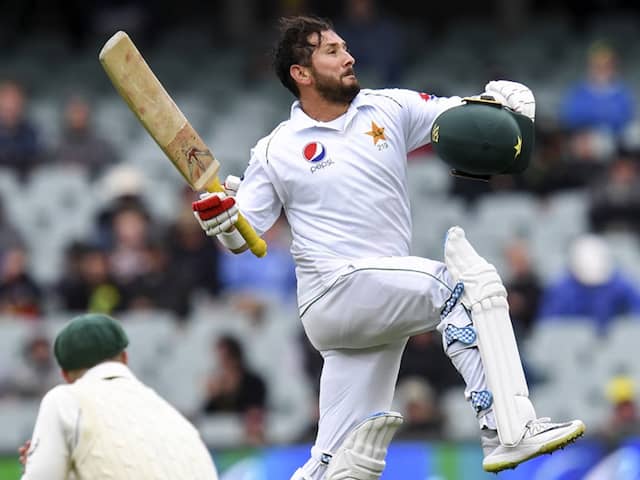 Yasir Shah, coming in to bat at No. 8 position, scored his maiden century in Test cricket on the third day of the ongoing day-night Test between Australia and Pakistan on Sunday. Yasir Shah's century helped Pakistan recover from a miserable position as they reduced Australia's first innings lead considerably. While the top-order batsmen, barring Babar Azam, struggled to get going against Australia's lethal pace battery, the 33-year-old leg-spinner batted brilliantly and played his best-ever Test knock of 113 runs. Former Pakistan fast bowler Shoaib Akhtar mighty impressed by Yasir Shah's "great show of resilience" congratulated him for his fightback. Akhtar even mocked Pakistan's top-order batsmen for their flop show and thanked Shah for showing them "Asay hota hai" (This is how it's done).

"Great resilience shown by @Shah64Y. Scoring a century in Australia coming at number 8 showing the rest of the batsmen "Asay hota hai bhai". Another good knock by @babarazam258 as well," Akhtar tweeted.

Great resilience shown by @Shah64Y. Scoring a century in Australia coming at number 8 showing the rest of the batsmen "Asay hota hai bhai".
Another good knock by @babarazam258 as well. #AUSvPAK pic.twitter.com/nMhqI6IAQm

After the second day's play, Akhtar came hard at the Pakistani bowlers for their "clueless" approach when things weren't going in their favour. He even slammed them for waiting for the Australian batsmen to either gift their wickets or just declare the innings.

"Clueless how to take wickets on these tracks. Waiting for Australia to declare or just gift the wickets. Asay nahi hota bhai!!," Akhtar had tweeted after on Saturday.

At stumps on Day 2, Pakistan were reeling at 96/6 but Babar Azam and Yasir Shah's 105-run partnership for the seventh wicket helped them reduce the gap.

Azam fell three runs short of his 3rd Test century as he nicked one straight to wicket-keeper Tim Paine off the bowling of Mitchell Starc.

However, Yasir Shah went to score his maiden Test century which made him only the fifth batsmen in the history to score a century batting at No. 8 against Australia.

Pakistan were bundled out for 302 runs in their first innings, trailing Australia by 287 enough for the hosts to enforce the follow-on.

When rain forced the umpires to call an early stumps on Day 3, the visitors were once again in a hapless position as they had lost three top-order batsmen with just 39 runs on the board, trailing Australia by 248 runs.

Adelaide Oval, Adelaide Cricket
Get the latest Cricket news, check out the India cricket schedule, Cricket live score . Like us on Facebook or follow us on Twitter for more sports updates. You can also download the NDTV Cricket app for Android or iOS.
Advertisement