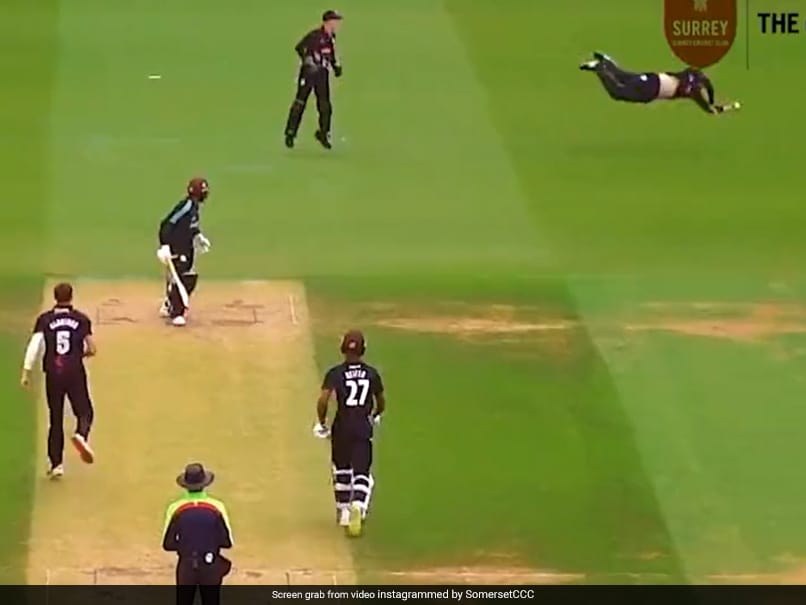 Rarely is there a better sight in cricket than the glorious visual of a brilliant fielding effort. Over the years, an acrobatic attempt on the field has garnered as much attention as a top-class batting or bowling effort. On Wednesday, Australian cricketer Matt Renshaw created a flutter with a great effort during a match of the Royal London Cup at The Oval. The 26-year-old Renshaw, who has so far played in 11 Tests, was stationed at first slip for Somerset during a match against Surrey when rival opener Ryan Patel outside-edged one off pacer Kasey Aldridge.

The ball flew sharply towards the second slip when Renshaw leapt to his left to take a fine catch. The effort impressed his team as its official handle tweeted: "One of the greatest catches you will see in a long time..."

One of the greatest catches you will see in a long time...

Several top players are competing in the Royal London Cup. Recently, Cheteshwar Pujara, days after scoring a 79-ball 107 for Sussex against Warwickshire, followed it with yet another century, this time a 174-run knock off 131 balls. Pujara's innings came against Surrey on Sunday. His team Sussex was tottering at 9 for 2 in 3.2 overs when the player came out to bat. Pujara first stitched a 205-run stand with Tom Clark for the third wicket and later capitalized on the laid platform.

While Clark fell on 104, Pujara continued to hold one end tight. He later raced to his century in 103 balls. Soon after his century, the Indian player changed gears and started striking the ball at a better strike rate. What followed was absolute carnage from Pujara as he scored 74 runs off the next 28 balls. His innings came to an end in the 48th over but only after he hit 20 fours and 5 sixes overall.

Sponsored by Vuukle
Comments
Topics mentioned in this article
Matt Renshaw Cricket
Get the latest updates on IPL Auction 2023 and check out  IPL 2023 and Live Cricket Score. Like us on Facebook or follow us on Twitter for more sports updates. You can also download the NDTV Cricket app for Android or iOS.