During a Plunket Shield match, Central Stags bowler Ben Wheeler pulled off a stunning run out to send Wellington's Nick Greenwood back to the pavilion. 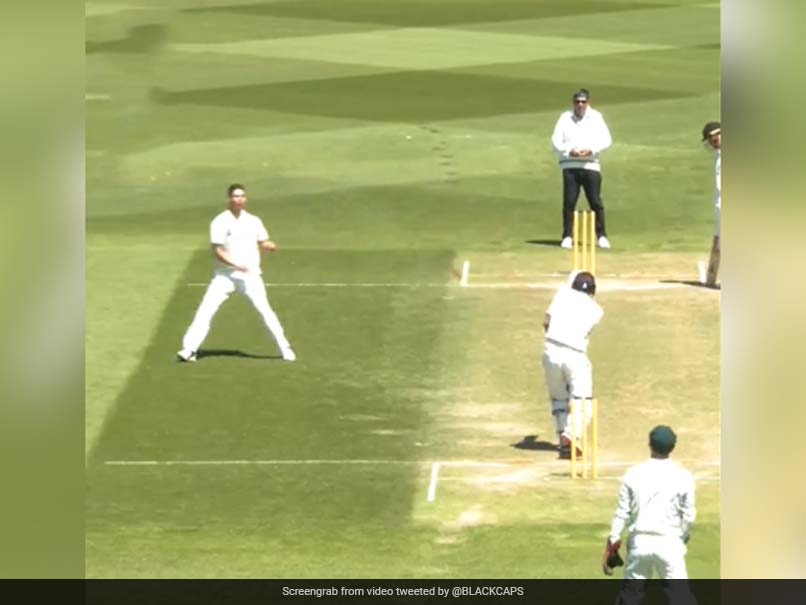 Ben Wheeler pulled off a cheeky run out to dismiss Nick Greenwood.© Twitter

Ben Wheeler was in brilliant form during Central Stags' recent win against Wellington in the ongoing Plunket Shield, pulling off an extraordinary run out dismissal to send Nick Greenwood back to the pavilion. Aiming to stage a turnaround after seeing their first innings score of 238 overtaken by Central Stags' 358, Wellington had a poor start and lost opener Jakob Bhula for a golden duck. Meanwhile, his opening partner Luke Georgeson could only add 28 runs to the scoreboard. The icing on the cake came in the 23rd over, when Wheeler bowled a full delivery on the middle stump line and Greenwood defended it back to him.

Such was the style on the shot that the batter took a few seconds to stay in the pose. But the pacer was having none of it. Seeing Greenwood out of the crease, a cheeky Wheeler aimed at the stumps and connected successfully.

The leg umpire didn't even have to think twice and the batter was immediately sent packing back to the dressing room.

The highlight was shared by Blackcaps on social media and it was captioned as, "As a bowler, you dream of pulling this off... Ben Wheeler just did it!"

As a bowler, you dream of pulling this off...

Ben Wheeler just did it!

Follow LIVE scoring and VIDEO of the Plunket Shield on the NZC App or at https://t.co/P2hRJ7AwVi#PlunketShield #CricketNation pic.twitter.com/bj8lxxSoyV

Greenwood departed after playing a knock of 26 runs off 63 deliveries. Wellington ended up posting 250 runs and setting a target of 131 runs, which Central Stags crossed in 44.1 overs.

Comments
Topics mentioned in this article
Ben Wheeler Nick Greenwood Cricket Social
Get the latest updates on ICC T20 Worldcup 2022 and CWG 2022 check out the Schedule, Live Score and Medals Tally. Like us on Facebook or follow us on Twitter for more sports updates. You can also download the NDTV Cricket app for Android or iOS.