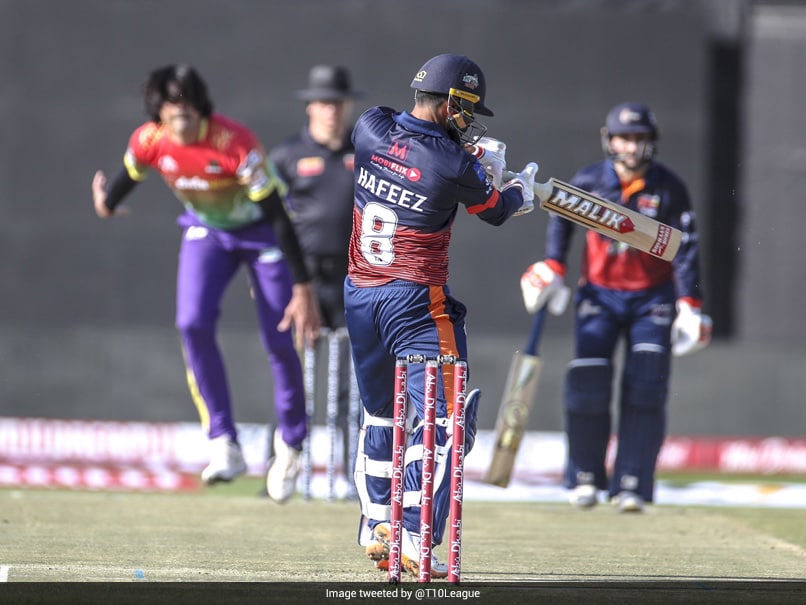 Bangla Tigers displayed a spirited all-round game to defeat defending champions Maratha Arabians by six wickets, in the seventh match of the Abu Dhabi T10 at the Abu Dhabi Zayed Cricket Stadium on Saturday. Arabians, despite not losing any wicket, could muster only 103 runs in their ten overs. Mohammad Hafeez's unbeaten 61 off 30 balls went in vain. Abdul Shakoor played second fiddle with an unbeaten 34 runs. Having won the toss, Bangla Tigers promptly elected to field. Maratha Arabians' opener Hafeez dangerously edged the first ball from Mohammad Irfan past the wicketkeeper for a boundary. He picked a boundary off the second ball too. Mujeeb Ur Rehman bowled a tight second over giving away just seven runs. Leg spinner Qais Ahmed too bowled a tight third over giving just five runs.

UAE's Abdul Shakoor scored two consecutive boundaries off George Garton, who bowled the fourth over. When Qais bowled another tight over giving away only four runs in the fifth over, Maratha Arabians had mustered only 37 runs at the halfway mark. In the next over, Shakoor pulled Irfan for a six. Though the opening partnership swelled, runs did not flow as desired.

In the eighth over, Hafeez punished Mujeeb for two boundaries and a six. He also earned a boundary off a wide, which even the wicketkeeper could not collect, resulting in 21 runs off that over. Hafeez reached his half-century in the fifth ball of the ninth over, and celebrated it by hitting a six off the last ball. The 100 runs partnership came in the third ball of the tenth over.

Chasing the target, the Tigers lost wickets at regular intervals but scored at a brisk pace and won the match with 12 balls to spare. Bangla Tigers openers Johnson Charles and Andre Fletcher could get only seven runs, from the first over from Yamin Ahmadzai. But in the second over, Charles hit Sompal Kami for a six over deep mid-wicket. He also picked the gap correctly to gain a boundary through a cut shot off Muktar Ali, and then hit him for a powerful six over long-on. With the last ball of the over, Ali forced Charles to edge to wicketkeeper Shakoor for 23. This was the first wicket to fall in the day.

Fletcher was then joined by Afif Hossain. Arabians' skipper Mosaddek Hossain then bowled a bad over, and was punished by Fletcher who hit him for two sixes and a boundary to pick 20 runs off that over. At the halfway stage, Bangla Tigers needed 43 runs to reach the target. Then Fletcher fell to Sohag Gazi hitting high to Hafeez for 31. This brought in UAE's Chirag Suri to the crease. He began by hitting Gazi straight over the sightscreen for a six. Suri's partner Afif Hossain too slog-swept Gazi for a six.

When Afif also whipped Ahmadzai for a six, Bangla Tigers looked set for an easy victory. Ahmadzai got Afif out for 22, by which time Bangla Tigers needed only 13 more runs from the last three overs. Suri hit his second six lifting Ishan Malhotra over long-on and got run out for 19. Tom Moores hit the winning boundary off the last ball of the eighth over.

Mujeeb Ur Rahman Qais Ahmad Johnson Charles Andre Fletcher Cricket
Get the latest updates on Fifa Worldcup 2022 and check out  Fifa World Cup Schedule, Stats and Live Cricket Score. Like us on Facebook or follow us on Twitter for more sports updates. You can also download the NDTV Cricket app for Android or iOS.