Azhar Ali, playing in his 56th Test for Pakistan, raised his 12th Test century and third against Australia with two runs behind the wicket to fine leg. Pakistan were 310 for six at stumps on a rain-curtailed Day 2 of the second Test 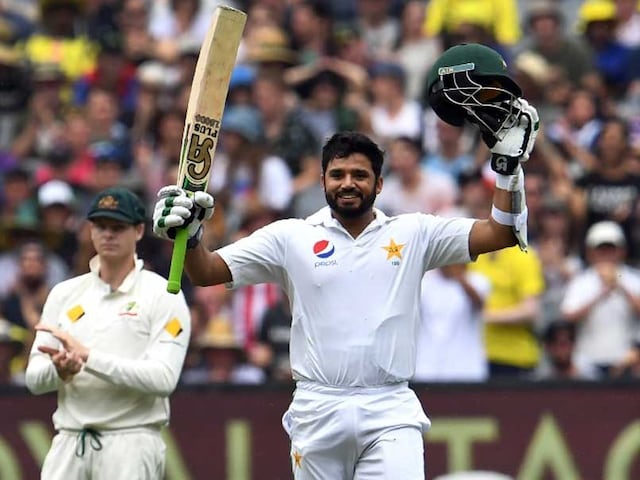 Azhar Ali celebrates after reaching his hundred in the second Test against Australia on Tuesday.© AFP
Melbourne:

Azhar Ali led a stubborn Pakistan response with a century on a rain-interrupted day two of the second Test against Australia at the Melbourne Cricket Ground on Tuesday.

Azhar, playing in his 56th Test, raised his 12th Test century and third against Australia with two runs behind the wicket to fine leg.

The tourists, who trail 0-1 in the series, were 310 for six with Azhar unbeaten on 139 and Mohammad Amir not out on 28, when rain again interrupted play in the final session of the day.

With the rain refusing to relent, stumps was called on Day 2 with Pakistan in a strong position.

Pakistan resumed play after lunch on Day 2 with Azhar and Asad Shafiq going strong. The tourists had lost skipper Misbah-ul-Haq for 11 before tea on Monday's rain-hit opening day.

The Pakistan duo added 115 runs for the second wicket, however, the visitors lost Shafiq just after he had reached his 18th half-century.

The hosts soon struck again with Josh Hazlewood getting the better of the dangerous Sarfraz Ahmed (10) to launch a mini-fightback for Australia.

But Azhar managed to stem any fear of a Pakistan collapse by launching a counter-attack. The right-hander took on the Australian bowlers and along with Mohammad Amir added 42 runs for the seventh wicket.

With runs coming at a fair pelt for Pakistan, rain came to the rescue of the Australians.

Earlier, Azhar's hundred came off 218 balls in 338 minutes and consolidated his position as Pakistan's leading runscorer this calendar year.

Shafiq, who scored a fighting 137 in Pakistan's narrow loss in the first Gabba Test, survived a review on 20 when an inside edge catch behind off Jackson Bird was found to have come off his pad.

Pakistan went to first drinks at 185 for four with Azhar seven runs short of his century.

Light rain sent the players from the field midway through the opening session, before play resumed and was then stopped again just before lunch.

It intensified during the lunch break after washing out play post-tea on Monday's opening day.

Comments
Topics mentioned in this article
Pakistan Cricket Team Australia Cricket Team Cricket Azhar Ali Misbah-ul-Haq Asad Shafiq
Get the latest updates on IPL 2020, check out the IPL Schedule for 2020 and Indian Premier League (IPL) Cricket live score . Like us on Facebook or follow us on Twitter for more sports updates. You can also download the NDTV Cricket app for Android or iOS.