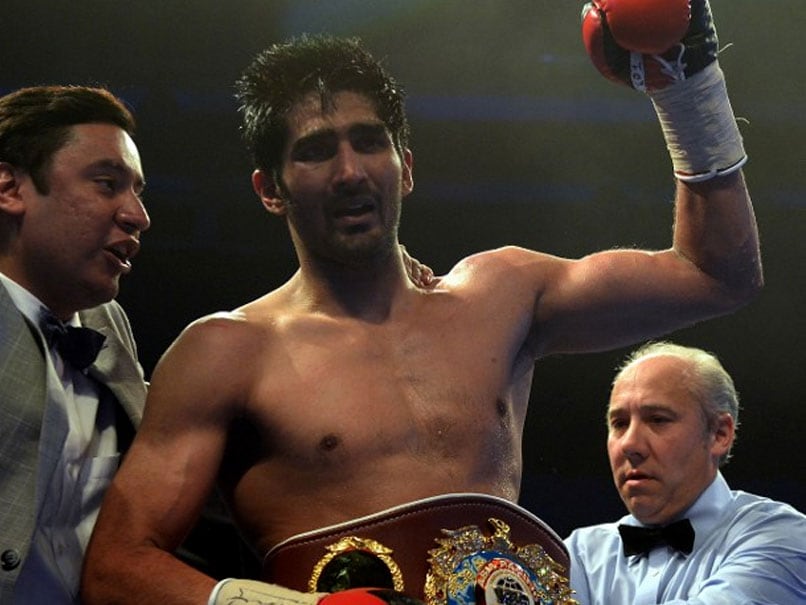 Vijender Singh knocked out Francis Cheka in the third round of their bout.© AFP

Vijender Singh needed less than three rounds to retain his WBO Asia Pacific Super Middleweight title, as he knocked out former world champion Francis Cheka in New Delhi on Saturday. Vijender dominated the bout from the beginning and didn't let Cheka a chance to penetrate his defence. Catch the highlights of the Vijender Singh vs Francis Cheka bout here. (LATEST NEWS)

22:25 IST: That's it from us for tonight. Thank you for staying with us for the live coverage of the bout.

22:20 IST: Vijender Singh thanks the crowd for the support. He looks absolutely elated! This has been an incredible year for the boxer for Bhiwani. Bigger challenges await him in 2017.

22:18 IST: "He (Cheka) wanted to talk more and I wanted to let my punches do the talking. It worked in the end!" Vijender Singh says after his win.

22:04 IST: That's it! Vijender Singh retains his title by a technical knock out.

22:00 IST: Another solid round from Vijender! After landing a jab on his opponent, Vijender taunts Cheka. The Indian boxer is looking in fine fettle here.

21:55 IST: Vijender lands a couple of big punches on Cheka in the first round! A solid start from the Indian there.

21:52 IST: And we are off! Cheka makes an aggressive start, Vijender defends the early punches from his opponent.

21:50 IST: The national anthems of India and Tanzania have been sung. The bout is about to start anytime now.

21:45 IST: There is a loud roar from the crowd as Vijender Singh enters the ring. Can he retain his title tonight?

21:33 IST: Indian wrestling legend Sushil Kumar says he expects Vijender to knock out Cheka tonight. Will the Indian pugilist be able to match Sushil's expectations? Cheka may have some other plans of his own.

21:28 IST: Now for the main event of the night! Vijender Singh is about to defend his WBO Asia Pacific Super Middleweight title against his fiercest opponent yet, former world champion Francis Cheka.

20:50 IST: Kuldeep Dhanda makes it 4-0 for Indian boxers on the night, He beats Egy Rozten by unanimous decision.

19:50 IST: Two bouts have been completed so far. In the first bout, Rajesh Kumar defeated Mubaraka Sseguya in the men's 61 kg category. In the night's next bout, Deepak Tanwar knocked out Sutriyono Bara Boys.

The duo exchanged a few heated words at the weigh-in, as they faced off for one last time before the much-awaited fight.

Cheka has racked up 300 rounds in the 16 years of his career compared to the Haryana boxer's 27.

In that July bout, Vijender needed all 10 rounds to edge out the 34-year-old Welsh-born Australian.

The home crowd will expect Vijender to deliver a knock out blow in the capital to make it another memorable night for Indian boxing.

Comments
Topics mentioned in this article
Boxing Vijender Singh Live Blogs Live Score
Get the latest updates on IPL 2021, IPL Points Table , IPL Schedule 2021 , live score . Like us on Facebook or follow us on Twitter for more sports updates. You can also download the NDTV Cricket app for Android or iOS.