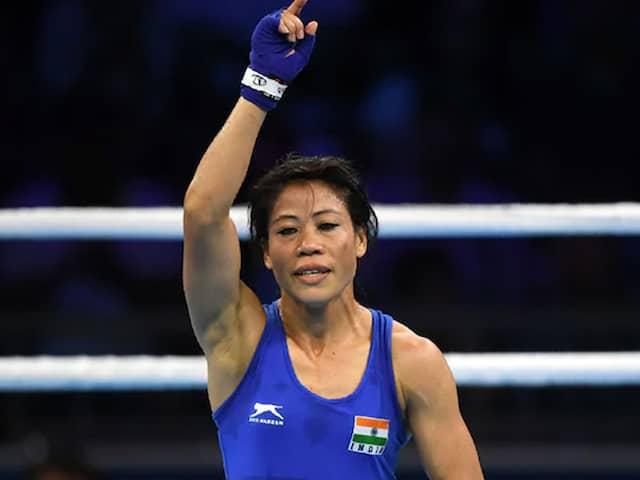 Mary Kom will face Vanlal Duati of Mizoram in the gold-medal bout on Friday.© AFP

Six-time world champion Mary Kom overcame some stiff resistance to beat promising Nikhat Zareen in a split decision to enter the women's 51kg category final, while the men pugilists dominated the ring by making it an all-Indian gold-medal clash in seven categories in the India Open in Guwahati on Thursday. In the most-anticipated bout of the day, 22-year-old former world junior champion Nikhat of Telangana was at her aggressive best against her "idol" Mary Kom who was happy to play the waiting game before taking the upper hand in the third round to win 4-1.

The 36-year-old Mary Kom, who was making her competitive debut at home in 51kg, took some blows initially but was quick to make amends as Nikhat was not able to connect her punches as the bout progressed.

Using her vast experience, Mary Kom regained her composure and dealt a few telling blows on the Strandja Memorial gold winner Nikhat and that seemed to have clinched the issue in favour of the London Olympics bronze medallist Manipuri in the third round.

Mary Kom will face Vanlal Duati of Mizoram in the gold-medal bout on Friday.

In the men's section, 17 Indians stormed into the final in 10 weight categories.

A day after he eliminated World Championship bronze medalist Rogen Ladon in a well-calculated bout, the 20-year-old from Haryana had his task cut out against his sparring partner but he again emerged victorious.

Panghal, who had clinched a gold in his new weight category in the Asian Championship, defeated national champion PL Prasad in the second 52kg semifinal. Panghal had won the Asian Games gold in Jakarta last year in 49kg.

"Amit has improved a lot of late but this is my big chance to show my prowess at a major competition. I hope to give my best and return winner," Siwach, who won a bronze at the GeeBee Boxing tournament in Finland in March, said.

Shiva Thapa also remained on course to clinching a gold at the same venue where he was crowned national champion three years ago as he fended off a strong challenge from his Polish opponent D Krystian Sczepanski to emerge 5-0 winner.

Sczepanski was at his aggressive best and kept hurling punches but Shiva cleverly kept frustrating his opponent by going out of his range.

"It made him tired at the end of every round. I was playing my style, did not give my 100 per cent. I was just trying to be tactical with him and let his punches go in the air and miss it so that he loses his control and confidence," Shiva said.

He will face Manish Kaushik in the 60kg final on Friday.

There was also a setback in store for India in the men's 75kg category, when Manjeet Panghal twisted his knee in the first round to be knocked out by his Filipino opponent Eumir Felix Delos Santosh.

Santosh will face Ashish Kumar in the final.

Former Asian champion Chatchai Decha Butdee of Thailand also created an upset in the men's 56kg by ousting former World Championship bronze medalist Gaurav Bidhuri in a unanimous decision. The Thai will take on Kavinder Singh Bisht in the final.

The 64kg category will also see a non-Indian in the final with Rohit Tokas taking on Colin Louis Richarno of Mauritius.