It was a spectacular homecoming for World championship bronze medallist Shiva Thapa. 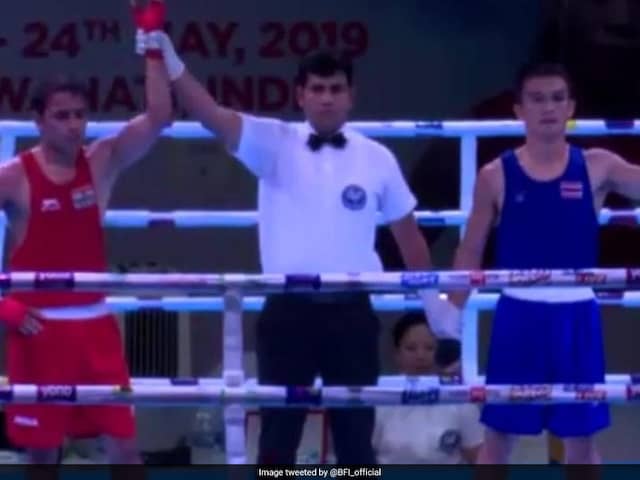 It was a spectacular homecoming for World championship bronze medallist Shiva Thapa, while Asian Games gold medallist Amit Panghal also lived upto his billing reaching the semifinals in 52kg category at the second India Open boxing tournament here Wednesday. Five other Indians also progressed to the semifinals at the Karmabir Nabin Chandra Bordoloi Indoor Stadium. Three years after he was crowned national champion at the same venue, a matured Thapa returned stronger as he clinically executed his plans to outwork his taller Mauritius opponent Hellene Damien 5-0 and set up a semifinal clash against D Krystian Sczepanski of Poland in the 60kg category.

"I was facing a taller opponent like him for the first time in my category," said Thapa, who will switch to 63kg after the tournament keeping in mind of the approved weight categories for Olympic qualification.

"He had a better reach so my strategy was to hit him from the close range and then quickly go out of his reach. It worked out perfectly."

All the buzz of the day was about the 13th bout of the day as hordes of school children, Shiva's family members including his father Padam Thapa waited anxiously for the local favourite to come inside the ring. "I can't express in words the amazing feeling.

The crowd was all at their toes and it was about living up to their expectation," said Thapa, who last month became the first Indian male boxer to claim four consecutive Asian medals with his bronze at the Asian Championship in Bangkok.

Ankit and Manish Kaushik also had 5-0 wins over their respective opponents making it a three-Indian lineup in the 60kg category.

Panghal, who claimed the 49kg gold after defeating reigning Olympic champion Hasanboy Dusmatov of Uzbekistan in the Asiad final in Jakarta last year, opted to play a waiting game against Thailand Chakapong Chanpirom in the first round.

Having moved up to Olympic category 52kg after winning gold at the Strandja meet in Bulgaria earlier this year, Panghal then stepped up his pace to win 5-0.

"It took sometime for me to assess him and get a grip of his style of play but I'm happy that it paid off," Panghal said.

"It's a tough category. Many new boxers will come in to meet the Olympic qualification standard. I have to watch both," Panghal, who had clinched a gold in his new weight category in the Asian championship beating Dusmatov again, added.

Panghal will take on reigning national champion Prasad in the semifinal, while the other half will see Siwach face-off against Bidhuri. Fresh from a bronze at the GeeBee Boxing tournament Finland, Siwach did his homework well to exact revenge on world championship bronze medalist Rogen Ladon of Philippines.

The two-time former Olympian had defeated Siwach by a split-decision in the President's Cup quarterfinals in Astana last year. Siwach rectified his mistake and waited to capitalise on the Filipino's mistakes to go for the kill as he won 4-1 via split decision.

"Last time I went for an allout attack that did not pay off. I watched videos of the bout and this time I could rectify my mistakes," Siwach said as he also got the support of his father and uncle who had come all the way from Haryana to support him.

He will next face Solanki, who had it easy against Louis Fleurot of Mauritius to seal a 5-0 win. "We never faced in a competition. But I've been his sparring partner in the camp. We all know each others strengths and weaknesses. I'm 100 per cent confident of an easy win," Siwach said.