Mary Kom made a successful return to 51 kg category by overwhelming her opponent Mala Rai of Nepal. 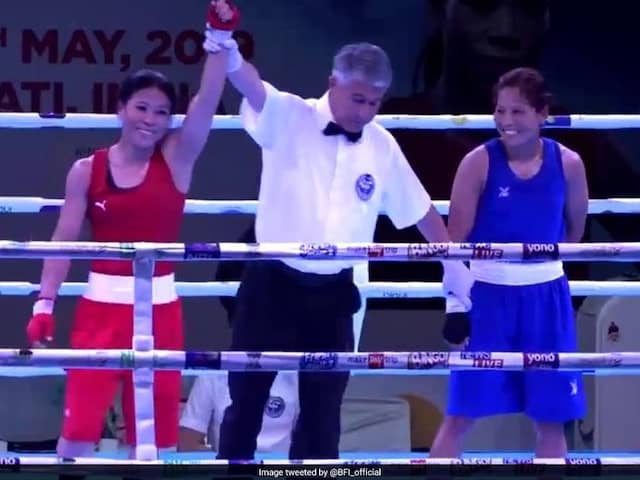 Mary Kom made a successful return to 51 kg category.© Twitter

Six-time world champion Mary Kom made a successful return to 51 kg category by overwhelming her opponent Mala Rai of Nepal to reach the semifinals and be assured of a medal as Indians continued to dominate the India Open boxing tournament in Guwahati on Tuesday. Walking into the ring to the loud cheers of a packed crowd at the Karmabir Nabin Chandra Bordoloi Indoor Stadium here, the London Olympic bronze medallist wasted little time in her 5-0 win. Such was the aura of the 'Magnificent' Mary that even her opponent showed no regret in the loss as she was seen sporting a broad smile hugging the Indian boxing idol in excitement.

"It's also a learning experience for me. The Nepal opponent was experienced and and quite strong. It's glad to be back in India. We all are trying our best to make the country proud," Mary Kom, who made her competitive debut at home in 51kg, said.

Strandja Cup gold medallist Nikhat was equally impressive with a flurry of punches against compatriot Anamika in her 5-0 victory. Up against her 'idol', Nikhat will be looking to avenge her South Asian Games defeat to Mary Kom in the semifinals.

"I was nervous nervous last time but this time I'm well prepared and hope to give my best," Nikhat said.

Strandja Cup silver medallist Manju Rani kept attacking her opponent, Cleo Claveras Tesara of Philippines right from the start to earn a win by RSC (Referee Stop Contest) in Round 1 to move to the 48kg semi-finals.

Monika was equally dominant in her quarter-final bout against Thailand's Apaporn Intongsee which she won 5-0.

Kalavani was declared winner by RSC in Round 2 over Bhutan's Tandin Lhamo while Nitu did not enjoy the same fortunes and was blanked 0-5 by former world champion Josie Gabuco of Philippines.

Earlier, Haryana youngster Pawan Narwal outsmarted Youth Olympics gold medallist Brian Arregui Agustin in the 69kg category as all the five boxers in the men's section advanced to the quarterfinals.

The Argentine dominated the first round but the the 21-year-old Indian slowly made a come back with his clever footwork to win 4-1 in a split decision.

"It was a close fight. He was dangerous with his left hook and landed powerful punches. Pawan outworked him with his clever footwork which was the key," India's chief performance director Santiago Nieva told PTI.

"He (Narwal) really applied the pressure and the Argentine could not sustain in the end. He scored very well from the outside. It was a fair decision," Nieva said of the bout, adding that the Haryana lad needs some more international exposure.

Narwal will next face Clair Marven of Mauritius for a place in the semifinals. Having lost out four years of competitions at junior level due to suspension of boxing federation, Narwal from Rindhana in Sonepat joined the camp only last year and caught everyone by surprise.

In 2018, Narwal had settled for a bronze at the Asian Games Invitational Test Tournament in Jakarta in February. He then went on to change the colour of the medal to silver at the Belgrade International Boxing tournament in August.

"We could not compete at the Junior Nationals for four years due to the suspension and made a direct entry to seniors last year," Narwal said. Talking about the camp in Patiala, he said: "I've got some good partners in the camp and Santiago Sir is working really hard for me. There has been a huge improvement in me."

In the bottom half of the draw in the 69kg, experienced Dinesh Dagar, who won a silver medal at the last edition of this tournament, was far from convincing but overcame Filipino Marjon Angcon Pianar 3-2 in a split decision.

"He can be better than he did today," Nieva said of Dagar who had defeated 2012 Olympic bronze medalist Evaldas Petrauskas of Lithuania en route to winning a silver at the GeeBee Tournament in Finland in March.

Youth World Championship bronze medalist Ankit Khatana (60kg) began the day for the Indian's in the men's section with a win over Ryan Boy Empoc Moreno of Philippines.