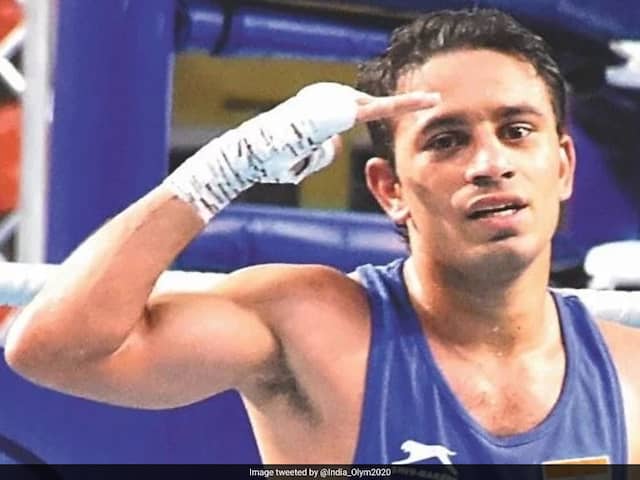 Amit Panghal and Manish Kaushik will aim to create history by booking their maiden final berths at the World Boxing Championships in Ekaterinburg, Russia, on Friday. India have never had two semi-finalists at the marquee event and in that respect, the two Haryana boxers have already scripted history. But if both or either of them manage to make the final, it would be a gigantic step forward for the sport in the country. The task, however, is easier said than done. Panghal has in his way Kazakhstan's Saken Bibossinov, who stunned Armenia's European gold-medallist and sixth seed Artur Hovhannisyan in the quarterfinals.

Kaushik, on the other hand, faces the most accomplished boxer in his weight category -- Cuban top seed Andy Gomez Cruz, who out-punched Russia's eighth-seeded Ilia Popov in the last-eight stage.

Cruz, who was the light welterweight (64kg) gold-medallist in the 2017 edition, is also a two-time Pan American Games gold-winner and not to mention, a terrific mover inside the ring.

"Now begins the tough job. We have already delivered on bettering the medal count and now we aim to better their colour," Indian Boxing's High Performance Director Santiago Nieva said.

"I am happy but I won't be completely happy till the time both of them reach the finals and they surely can, both of them," added the country's chief coach CA Kuttappa.

They are up against tough challengers but that in no way makes them automatic underdogs. Panghal, the pint-sized dynamo from Rohtak, is the reigning Asian Games and Championships gold-medallist and has back-to-back gold medals at one of Europe's oldest tournament -- the Strandja Memorial.

Kaushik, the shy man hailing from the cradle of Indian boxing in Bhiwani, is a Commonwealth Games gold-medallist and is a two-time national medal winner.

Both are employed with the Indian Army and both have shown a soldier's grit in some draining bouts so far.

"He (Bibossinov) has a long reach but I think I have the strategy to beat him," said Panghal after the quarterfinal triumph.

Panghal didn't go into the details but so far, he has delivered each time he has promised. In fact, it was at the world championships when Panghal first caught everyone's attention.

In the 2017 edition, he nearly took down the then defending champion Hasanboy Dusmatov in the quarters but lost by the slenderest of margins.

The Indian got his revenge a year later in the Asian Games final, where a gold catapulted him to star status in Indian boxing.

Kaushik has had a stop-start career so far. He first hit the headlines when he took down 2015 world bronze-winner and three-time Asian medallist Shiva Thapa in the national championship finals. That victory opened the doors of the senior national camp for him and he has been locked in a neck-and neck battle for a place in the side with Thapa ever since.