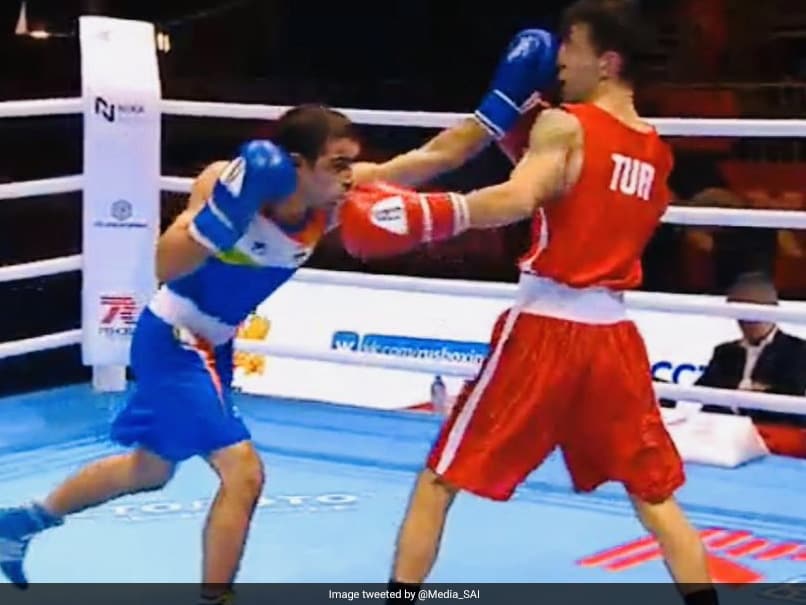 Amit Panghal booked a place in the quarter-finals of World Boxing Championships.© Twitter

India's all four boxers, who were in action in the AIBA World Boxing Championships on Tuesday, won their respective bouts to advance to the quarterfinals of the prestigious tournament. Asian Games gold medallist Amit Panghal defeated Batuhan Citfci by an unanimous 5-0 verdict in Men's Fly 52kg pre-quarters in Ekaterinburg, Russia.With this, Amit Panghal entered the quarterfinals, which will be played on Wednesday. The Asian Games gold medallist is seeking his first medal from the World Championships and is India's best bet in the tournament.

"It was a good bout as I fought against an experienced boxer. I will be ready with my strategy for Paalam tomorrow. I dedicate this win to Prime Minister Narendra Modi, who is celebrating his 69th birthday today," Panghal said after the bout.

"I stuck to the strategy that was given to me by my coaches and I am happy that it got me the result I wanted," Kaushik said.

India's another pugilist Sanjeet won his 81-91kg pre-quarters bout against Uzbekistan's Sanjar Tursunov by a 4-1 split verdict. Sanjeet's victory was remarkable as it came against a tough opponent, who won Bronze medal in last edition and was seeded second this year.

"I had beaten this guy in the India Open. He had power but I managed to outwit him on counter-attack. He got hit quite a lot on my counter-attacks," Sanjeet said after the bout.

The last Indian to enter the ring on Day 9 was Kavinder Singh Bisht and he edged past Finland's Arslan Khataevin by a 3-2 split verdict in Men's Bantam 52-57kg.

All these boxers are only a win away from a booking their place on the podium as a win in the quarterfinals will guarantee them at least a bronze medal.

Second-seeded Panghal, the reigning Asian champion, will next be up against Filipino Carlo Paalam, who had lost to Panghal in the semifinals of the Asian Games in Jakarta last year. Paalam defeated Korea's Jo Sehyeong in a unanimous verdict in his pre-quarterfinal bout.

Kaushik, on the other hand, will square off against Brazil's Wanderson de Oliveira. Oliveira defeated Japan's Saisuke Narimatsu in his last-16 stage bout.

Sanjeet will be up against seventh-seeded Julio Cesa Castillo Torres of Ecuador. Torres got the better of Hungary's Adam Hamori.