Amit Panghal produced a clinical performance in his first outing in the World Boxing Championships 2019. 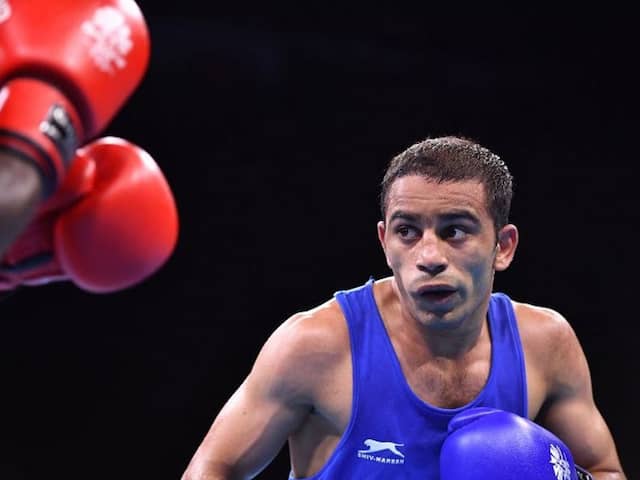 Amit Panghal advanced to the next round with a 5:0 win over Chinese Taipei opponent.© AFP

The second-seeded Panghal, an Asian Games gold-medallist who had been given a first-round bye, will be up against Turkey's Baluhan Citfci in the pre-quarterfinals. Manish has a tough one at hand as he will square off against fourth-seeded Mongolian Chinzorig Baatarsukh, a silver-medallist at the Asian Games as well as the Asian Championships.

Sharp as ever with his attacks, Panghal dominated Po-Wei from the first round itself to notch up a comfortable 5-0 win. The boxer from Taipei spent most of his time trying to avoid any engagement, prompting the referee to caution him against the passive approach.

"I had fought him earlier as well in the Asian Championships' first round and won 3-2. This time I was keen to ensure that the fight was not that close and I managed to do that," Panghal, 23, said after the bout.

"I decided to be aggressive from the very first round and log as many scoring punches as possible," he added. A quarter finalist in the last edition of the World Championship in Hamburg, Panghal's trademark aggression and the pace was something that Po-Wei just couldn't cope with.

In the evening session, Kaushik, competing in his maiden World Championship, was equally ruthless against Lacruz. The former national champion had little trouble connecting his combination punches against an opponent, whose defence was mostly non-existent and the attacking streak also fizzled out after the opening round.

Ashish, on the other hand, was locked in a draining contest.

Tanglatihan was not the more attacking but was certainly the more accurate of the two, managing to move in and out effortlessly against a slightly slower Ashish.

Panghal, who lost to the then-defending champion Hasanboy Dusmatov in the quarterfinals in 2017, has been in tremendous form for more than a year now.

Even a change of weight category, from 49kg to 52kg, has had little impact on his performance.

In fact, his Asian Championship gold earlier this year came within a couple of months of him going up to 52kg.