"Dedicate This Win To My Country": Mary Kom After Winning Her Record Sixth World Championship Gold 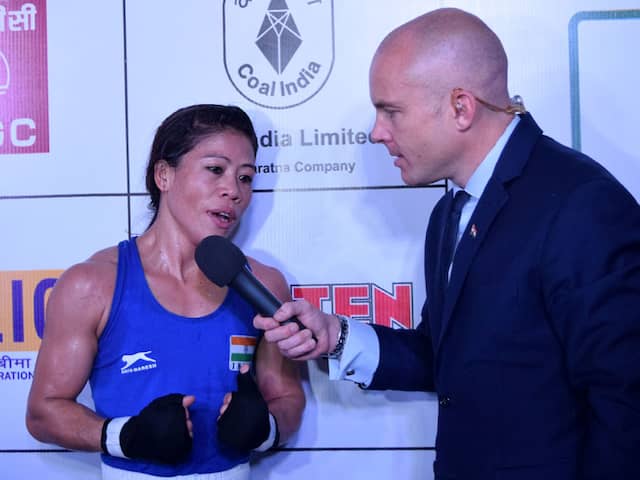 Mary Kom has also won a silver back in the 2001 edition.© BFI

After becoming the first woman to clinch six World Championship gold medals, Mary Kom decided to dedicate the feat to India. Mary Kom, who beat Ukraine's Hanna Okhota by a unanimous 5-0 decision in the light flyweight 48 kg category, said, "I would like to dedicate this win to my country." The 35-year-old Manipuri boxer, a mother of three and a pre-tournament favourite for the gold, rewrote the record books when she eclipsed her joint haul of five golds with Katie Taylor of Ireland.

I would like to dedicate this win to my country: Boxer Mary Kom after winning gold in Women's World Boxing Championships against Hanna Okhota pic.twitter.com/XJEFlD77Bd

The Manipuri pugilist, who went over her weight category to clinch a 51kg bronze at the London Olympics, previously clinched the World Championship gold on five occasions -- 2002, 2005, 2006, 2008, 2010 -- besides bagging a silver on her debut in 2001. Welcomed by thunderous chants of "Mary Mary" at the jampacked KD Jadhav hall, the Indian took the ring with a statistical and psychological advantage over her Ukrainian opponent, whom she recently beat at the Silesian Women's Open semi-finals in Poland.

Living up to the reputation, Mary started the opening round aggressively and landed a couple of right jabs quite early into the round before taking full control with a right-two punch combination to Hanna.

However, towards the end of the first round, the Ukrainian managed to get a shot on Mary's face before the Indian wrestled Okhota to the ground. Mary appeared unshakable throughout and ended the round with a few jabs and a right-hand, left-hand combo.

The Indian came back with more aggression in the second round, and started with a powerful hook with her right and then doubled the attack with two quick right jabs to leave her opponent rattled.

A left-handed flick from Okhota pushed Mary backwards but towards the end of the round, the Indian delivered a perfect right hook to inch closer to another gold.

With this win, Mary Kom's hunger for glory has only grown. With eyes peeled on the Olympic podium, she said, "I am still dreaming about winning the gold in 2020."
Further thanking everyone for their support, she said, "First of all, I would like to thank all my friends. They came to see my play. Especially for me, in the contingent, to cheer for us. Today, I am a little bit emotional, since I have been feeling there is no category in the Olympic Games. Because of your love and support, I am able to qualify for 2020 Tokyo Olympics. Four years ago I was not able to qualify. I am still suffering from making the weight."

Mary, who matched Cuban men's legend Felix Savon as the joint most successful pugilist (men and women) in the World Championships history, said: "Thank you for your love and support. I don't have anything to give, except for a gold in the country."

Mary Kom also said she became a smarter fighter in the later part of her career. "If you see my bouts in the initial seven years of my career and now, you will see a lot of difference. Earlier, I was like a bull fighter. I was always charging and I would be totally tired and could not even raise my hand after the fight," she said after winning a record sixth gold in the showpiece.

"Now, I am smarter and try to find out the game of my opponent and then think out mine in the ring itself. Nowadays, it is not that tiring also unlike when I was younger. It is all about experience and one learns from experience. These younger girls will also learn from experience," she said, referring to the other three Indian medal winners Lovlina Borgohain, Sonia Chahal and Simranjit Kaur, who were sitting by her side.