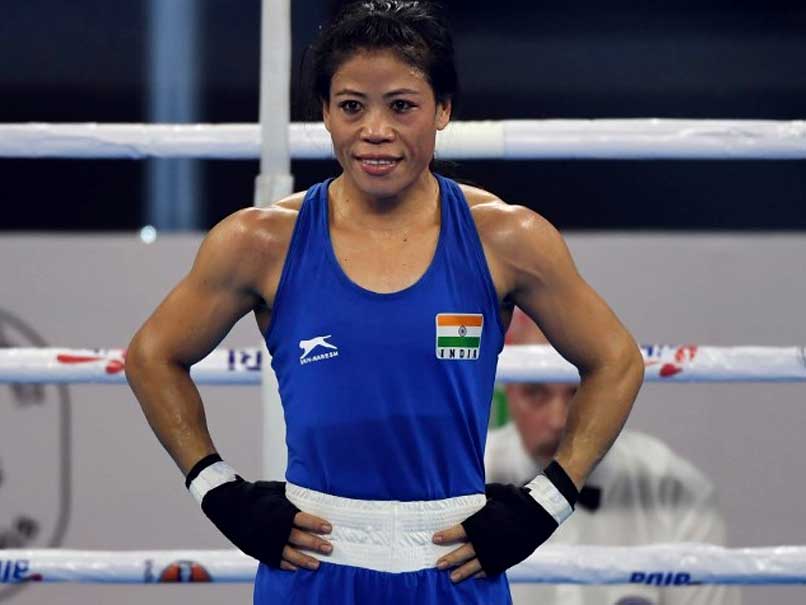 MC Mary Kom created history after she outclassed Ukraine's Hanna Okhota by a unanimous 5-0 decision in the women's 48 kg light flyweight final of the Women's World Championships at the KD Jadhav Indoor Stadium in New Delhi on Saturday. With this, the 35-year-old Indian boxer became the most successful boxer in the history of Women's World Boxing Championships. Mary had previously won the gold medal in 2002, 2005, 2006, 2008, 2010 editions of the Championships. Apart from this, she had also won the silver medal on her debut in 2001. Mary couldn't hold back her tears when she thanked the home crowd for immense support. "I want to thank the fans who turned up today to cheer me and the Indian contingent. They have been supporting me for last many years," Mary said after winning the final bout. In the women's 57 kg featherweight final, India's Sonia lost the title to Ornella Gabriele Wahner of Germany in a split decision of 1-4.

Thank you for joining us for the live blog.

17:36 IST: END OF ROUND 2!A flurry of punches keep Ornella in command.

17:35 IST:The Bhiwani-born boxer is in deep trouble. The German is still on the top. It seems as if she's vying for a silver now.

17:33 IST:The second round begins. Sonia will look for a fightback now.

17:32 IST: END OF ROUND 1!Ornella appears too aggressive by the end of the first round.

17:27 IST:From the red corner, India's 21-year-old Sonia is ready to fight for her maiden gold medal at the World Championships.

2nd in the fray, #Sonia to take the ring shortly for her summit clash against 's OG Wahner in the 57 kg category as she aims to create history winning the on her debut! Come on girl, the nation's behind you! #PunchMeinHainDum #AIBA #WWCHs2018 pic.twitter.com/p1DdYtxC8X

16:30 IST:"I want to thank the fans who turned up today to cheer me and the Indian contingent. They have been supporting me for last many years," Mary said after winning the final bout.

16:27 IST:Mary Kom just can't hold back her tears as she has just created history.

And India's golden lady has done it; @MangteC is the current reigning light fly champion after she defeats Ukraine's H.Okhota in an unanimous 5:0 decision at the #WWCHs2018 grand finale! Congratulations Mary! #PunchMeinHainDum #AIBA pic.twitter.com/EcILbkgCLO

16:21 IST:Just a few minutes away from creating history, Mary is dominating the Round 3 as well.

16.20 IST:The third round begins at the KD Jadhav Indoor Stadium.

16:19 IST:And a fascinating Round 2 comes to an end. Mary has been marvelous so far.

16:17 IST:The second round begins. Mary will look to strengthen her chances of a record sixth World title.

16:15 IST: By the end of Round 1, Hanna took the control for a while but Mary appeared unshakable throughout the opening round.

16:13 IST:Living up to the reputation, Mary Kom has started impressively.

16:11 IST:India's iconic boxer MC Mary Kom is out to take the ring against Hanna. She recently registered a comfortable win against Hanna at the Silesian Women's Open semi-finals in Poland.

16:10 IST:The wait is over. Here comes Hanna Okhota of Ukraine to take the ring.

16:06 IST: Mary Kom gears up for a historic sixth World Championship title. She will be the first to enter the ring today, along with her opponent Ukraine's Hanna Okhota.

A legend of the sport, @MangteC lived up to her lofty reputation as the five-time World Champion once again assured a place in the grand finale of #WWCHs2018, with an aim of entering the record books! Come on Mary, let's do this the nation believes in you! #PunchMeinHainDum #AIBA pic.twitter.com/6NQQv69sAM

15:49 IST: There is an age gap of 13 years between the two finals opponents with the Ukrainian boxer being just 22-year-old. When Mary was of her age, she already had two World Championship gold medals to her name.

15:40 IST:In the last meet with Hanna, Mary registered a comfortable win at the Silesian Women's Open semi-finals in Poland earlier this year.

15:35 IST:The home crowd will boost Mary's confidence against her Ukrainian opponent. She earlier won a gold medal when India hosted the biennial amateur boxing event in 2016 in New Delhi.

15:31 IST:But a lot has happened since then. The 35-year-old Manipuri boxer is a mother of three now.

Brace yourself as @MangteC starts off proceedings; to play the first match of the Finals against Ukraine's H.Okhota in the 48kg summit clash. #PunchMeinHaiDum #WWChs2018 #boxing pic.twitter.com/qEMevCKRAg

15:18 IST:Mary is currently tied at five gold medals with Katie Taylor of Ireland.

15:10 IST:India's MC Mary Kom will take on Hanna Okhota of Ukraine in the summit clash of the 48 kg women's light flyweight final at the KD Jadhav Indoor Stadium, New Delhi.

Good morning from Delhi Today is the #WWCHs2018 finals!
Like and retweet our daily morning photo from Delhi and you could win an official pair of #WWCHs2018 gloves!
#ChampsBornHere #AIBAFamily pic.twitter.com/UTU3j9NUHH

15:00 IST:Hello and welcome to our live coverage of the Women's World Boxing Championship 2018 final bouts between Mary Kom and Hanna Okhota, and Sonia Chahal and Ornella Wahner at the KD Jadhav Indoor Stadium in New Delhi.

Mary Kom, who is still tied with Katie Taylor of Ireland on five gold medals, has an opportunity to become the most successful women's boxer if she beats Hanna Okhota in the final. "I have beaten the North Korean opponent in the Asian Championships last year and that time it was a one-sided bout. But win or lose, every boxer always learn and I think she has learnt(from that bout). At the same time I also have learnt and I came prepared to defend and counter. I am happy that I am in the final," Mary said after the bout.

Comments
Topics mentioned in this article
Other Sports Live Blogs Mary Kom Boxing
Get the latest updates on IPL Auction 2023 and check out  IPL 2023 and Live Cricket Score. Like us on Facebook or follow us on Twitter for more sports updates. You can also download the NDTV Cricket app for Android or iOS.