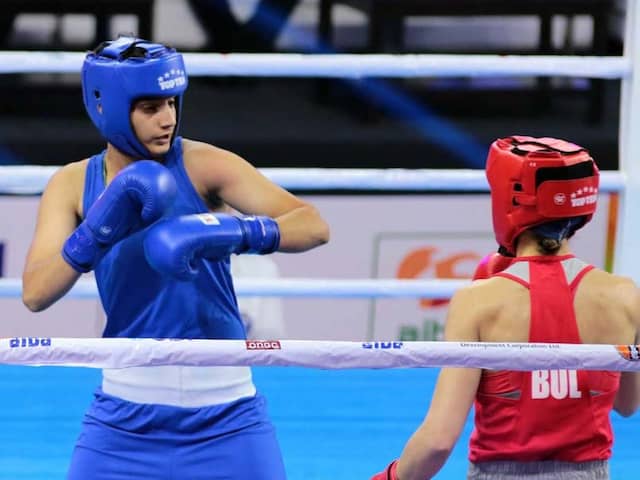 Sonia is the third Indian to qualify for the quarter-finals.© BFI

India's fifth day at the AIBA Women's World Boxing Championships started on a winning note as Sonia punched her way into the quarterfinals after beating former world champion Stanimira Petrova in the 57 kg category on Monday. And the experienced Pinki Rani (51 kg) along with Simranjeet Kaur (64 kg) also entered the quarter-finals of their respective weight categories. But Saweety Boora was not as lucky as she lost in the middleweight (75 kg) pre-quarterfinals to Poland qualifier Elzbieta Wojcik, who won a unanimous decision against the Indian. Saweety had received a bye in the first round.

After failing to put her best foot forward in the first round, Sonia bounced back into the bout after the break, thanks to some motivation from the Indian coach Raffaele Bergamasco.

On Sunday, Mary Kom defeated Aigerim Kassenayeva of Kazakhstan in the women's light flyweight (48 kg) category to enter the quarterfinals. The 2018 Commonwealth Gold medallist clinched victory by a unanimous 5-0 decision. Whereas in a major disappointment for the home fans, Sarita Devi lost to Kellie Anne Harrington of Ireland in the women's lightweight 60 kg category by a split 2-3 decision.

In the other bouts on Sunday, Assam's Lovlina Borgohain defeated Panama's Atheyna Bylon by a unanimous 5-0 decision to proceed to the pre-quarters stage of the 69 kg women's welter-weight category. While Bhagyabati Kachar defeated Germany's Irina-Nicoletta Schonberger by a 4-1 split decision in the 81 kg women's light heavyweight category.