With this win, PV Sindhu became only the second Indian to reach the final at the World Championships after Saina Nehwal achieved the feat in the last edition at Jakarta. 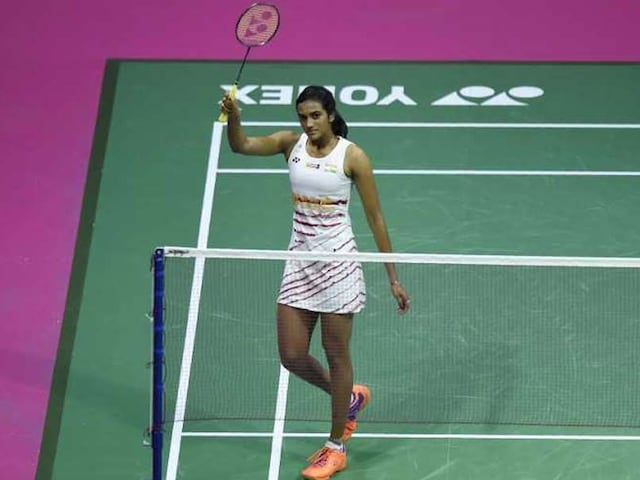 PV Sindhu assured herself of at least a silver after reaching the final at the World Championships.© AFP

PV Sindhu put in a dominating performance to completely outclass her Chinese opponent and march into her maiden women's singles final at the World Badminton Championships being held in Glasgow. Sindhu destroyed Chen Yufei of China 21-13, 21-10 on Saturday night in a match lasting just 48 minutes, thereby assuring herself of at least a silver medal. Sindhu had won the bronze at the World Championships in 2013 and 2014. Sindhu's all round game proved too much for the 19-year-old Chinese to handle. India's star shuttler was in top form and apart from a slow start, she put in a perfect display. The Indian shuttler will face Japan's Nozomi Okuhara, who beat Saina Nehwal in the 1st semi-final, for the gold.

With this win, she also became only the second Indian to reach the final at the World Championships after Saina achieved the feat in the last edition at Jakarta.

The 22-year-old will next take on Okuhara, whom she has beaten thrice and lost an equal number of times in the last six meetings. However, the Indian had an upper hand in the last two meetings having gotten the better of the Japanese at Rio Olympics and 2017 Singapore Open.

The Chinese shuttler had no answer to Sindhu's powerful smashes and was left shell-shocked by the barrage. Sindhu, a two-time world championship bronze medallist, also put in a brilliant display at the net to overpower the Chinese.

After being initially tied at 3-3, Yufei, the reigning World Junior Champion, won a long rally when Sindhu miscued an overhead stroke to break the deadlock. The fourth seeded Indian tried to dictate the rallies and she did manage to break the Chinese defence to claw back at 8-8 and then led 9-8 when Chen hit the net. A surprise jump
smash from Sindhu earned her another point and she took a 11-8 advantage with a lovely drop.

The lanky Indian tried to attack early in the rallies and backed it with precise drops and smashes to move to 13-8 lead. Soon her fist-pumping was back as she celebrated each point, reaching 15-9 at one stage.

The drift, however, seemed to bother Sindhu as she misjudged a few returns at the baseline to concede points. Yet the Indian marched on and took the first game 21-13.

In the 2nd game, Sindhu completely outplayed her opponent taking a 8-0 lead. Without breaking a sweat, the Indian star romped to victory in the second to clinch the match.

Meanwhile, in the day's first semi-final, Saina Nehwal bowed out of the tournament after losing 21-17, 12-21, 10-21 to her Japanese opponent Nozomi Okuhara. Despite the loss, Saina took home a bronze medal.

The London Olympic bronze medallist dominated her opponent in the first game, wrapping it in just 22 minutes. However, Okuhara had other plans as she did not allow Saina to settle in the second game.

The Indian star fought hard to keep her herself alive in the all-important third game but Okuhara proved to be a tough nut to crack and easily won the final game to deny Saina a place in the final.