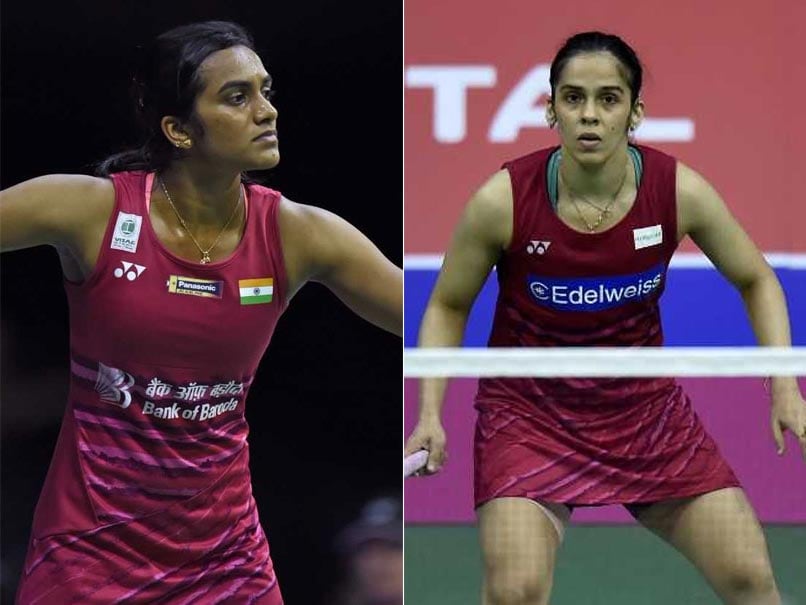 PV Sindhu reached the final with a dominating display after Saina Nehwal had lost her semi-final match.© AFP

PV Sindhu put in a dominating performance to completely outclass her Chinese opponent and march into the women's singles final at the World Badminton Championships being held in Glasgow. Sindhu destroyed Chen Yufei of China 21-13, 21-10 on Saturday night in a match lasting just 48 minutes, thereby assuring herself of at least a silver medal. Sindhu had won the bronze at the World Championships in 2013 and 2014. Meanwhile, in the day's first semi-final, Saina Nehwal bowed out of the tournament after losing 21-17, 12-21, 10-21 to her Japanese opponent Nozomi Okuhara. Despite the loss, Saina took home a bronze medal. The London Olympic bronze medallist dominated her opponent in the first game, wrapping it in just 22 minutes. However, Okuhara had other plans as she did not allow Saina to settle in the second game. The Indian star fought hard to keep her herself alive in the all-important third game but Okuhara proved to be a tough nut to crack and easily won the final game to deny Saina a place in the final.

02:50 IST: Thanks for joining our coverage today. Do join us for the final tomorrow.

02:45 IST: It's over!! Sindhu is through to the women's singles final and thereby has assured herself of a maiden World Championship silver. Historic moment for the Indian!

02:42 IST: Sindhu just 3 points away from qualifying for the final

02:40 IST: Brilliant net play from Yufei. She hasn't given up just yet. Sindhu, though, will surely not relinquish this lead.

01:57 IST: PV Sindhu wins the 1st point of the semi-final against Chen Yufei.

01:30 IST: Not too long left for the much-awaited women's singles semi-final between Sindhu and Chen Yufei.

Only one match to go before PV Sindhu takes the center stage. Stay with us! #2017BWC

23:42 IST: It's game one! One game each for Yuki Fukushima-Sayaka Hirota of Japan and Kamilla Rytter Juhl-Christina Pedersen of Denmark.

The Men's Singles Final will be Viktor Axelsen VS Lin Dan

Who's going to be MS World Champion? #2017BWC pic.twitter.com/w6NgXZ9N6l

The magnificent Lin Dan enters the final of #2017BWC and will look to win the Worlds for record 6th time! Congratulations to the legend. pic.twitter.com/yx2QrDeCrD

21:32 IST: The second session of the day begins! It is Son Wan Ho against Lin Dan.

Not long now till the second session of the day begins - and we kick it off with LIN DAN (China) v World No.1 SON WAN HO (Korea) #2017BWC pic.twitter.com/dUhBWC4cT1

21:30 IST: Welcome back to the live blog of the World Badminton Championships.

Saina Nehwal shines at the Worlds again. Her #2017BWC campaign comes to an end but not before she earns a medal for pic.twitter.com/YuTFToFeyR

18:56 IST: Okuhara is showing her determination, she first draws level and then leads Saina 7-3.

Only 4 points in the final game but all were closely fought.

18:49 IST: It all boils down to the third and last game. Will Saina be able to repeat her performance from last night and book a place in the final?

The Japanese shows tremendous grit to take the second game 21-17 against Saina Nehwal. Bring on the third! #2017BWC

Yes! Saina makes it even again!

18:26 IST: Okuhara seems to have upped her game vs Saina Nehwal, she leads 4-0 in second

Okuhara is showing urgency in the second game. Leads 4-1 against Saina at the start of it. #2017BWC

18:24 IST: Okuhara wins the first point of the second game.

Inching close to winning the first game. Extends the lead to 8 points!

5 points away from winning the opening game.

Domination from Saina Nehwal so far.

Goes into the break leading 11-6 against Okuhara.

Saina is showing amazing skills at the net. Leads 7-2 against her. Aggressive start from her! #2017BWC

17:54 IST: Both players are in the court, match to begin shortly.

It's a close game so far between Japan's Matsutomo & Takahashi and China's Chen & Jia. First game 11-9 at the moment #2017BWC pic.twitter.com/CHEwL5Y5mK

17:07 IST: After a tough fight against Scottish Kirsty Gilmour in the quarters, Saina will look to extend the 6-1 head-to-head win against Japan's Nozomi Okuhara and book her place in the World Championships final. Match begins in a while.

She has come this far but we are hungry for more!

Saina Nehwal will look to seal a place in #2017BWC final. Match starts in a while. pic.twitter.com/DrCID4cr3j

17:03 IST: Saina Nehwal and PV Sindhu will be eyeing an all-India final at the World Championships later in the evening. Stay tuned!

Get ready for Saturday evening's blockbuster

PV Sindhu & Saina Nehwal will compete against tough opponents for a place in #2017BWC final pic.twitter.com/oG4DTCMqFv

16:57 IST: Currently in women's doubles, Misaki Matsutomo and Ayaka Takahashi of Japan is up against China's Chen Qingchen and Jia Yifan.

"I'm so proud but I'm not done yet" @ViktorAxelsen speaks to #2017BWC on his victory over Chen Long in the Semi-Finals. @BadDK @EuropeBEC pic.twitter.com/i9Lgdezza3

Time for an Indonesian party in Glasgow!

16:50 IST: Hello and welcome to the live blog of the World Championships, Day 6.

PV Sindhu on Friday completed a hat-trick of medals at the World Badminton Championships  as she stormed into the semifinal at Glasgow. Sindhu, a silver medallist at the Rio Olympics, assured herself of at least a bronze with a clinical display against world number six Chinese Sun Yu. The 22-year-old, who has won a bronze at the 2013 and 2014 editions, disposed off Sun Yu 21-14 21-9 in 39 minutes at the Emirates Arena. The world No. 4 Indian takes on Chinese - world No. 10 Chen Yufei later in the day.

Comments
Topics mentioned in this article
Saina Nehwal PV Sindhu Badminton Live Blogs
Get the latest updates on IPL 2021, IPL Points Table , IPL Schedule 2021 , live score . Like us on Facebook or follow us on Twitter for more sports updates. You can also download the NDTV Cricket app for Android or iOS.