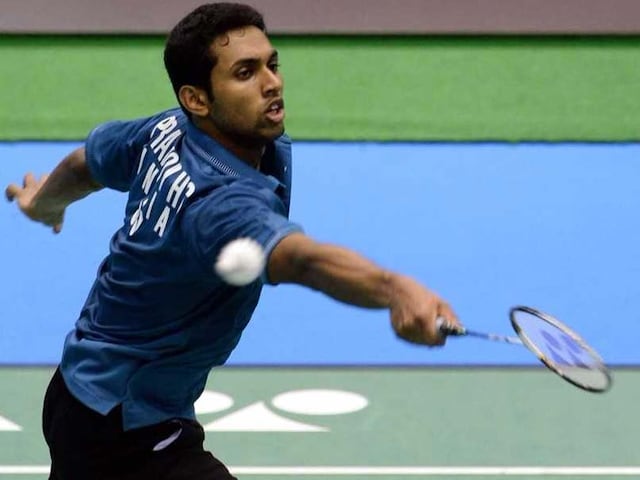 HS Prannoy advanced to the quarterfinals of the New Zealand Open.© AFP

HS Prannoy advanced to the quarterfinals of the New Zealand Open with a straight-game win over Hong Kong's Wei Nan in the men's singles competition of the Grand Prix Gold event on Thursday. Fourth seed Prannoy, who had clinched the US Open last month, defeated 10th seed Wei Nan 21-18, 21-19 in a 46-minute match, to set up a clash with 11th seed Lin Yu Hsien of Chinese Taipei. Former National champion and seventh seed Sourabh Verma also reached the quarters after emerging victorious in an all-Indian pre-quarterfinal battle against Parupalli Kashyap. The 24-year-old prevailed over Kashyap 21-18, 13-21, 21-16 in a close match that last an hour and four minutes at the North Shore Events Centre.

He will next take on either Israel's Misha Zilberman or Hong Kong's Lee Cheuk Yiu.

It was curtains for young Siril Verma after he lost 13-21 14-21 to Chia Hung Lu of Chinese Taipei.

Prannoy had lost to Wei at the Malaysia Open in 2014 but he avenged his loss today after dishing out a gritty performance.

The World No. 17 Indian was leading 9-5 in the opening game but Wei managed to claw back at 10-10 and then earned a slender edge at the break when Prannoy hit long.

Wei moved to 13-10 before Prannoy reeled off five straight points to turn the tables.

The Indian eventually moved to game point when Hong Kong shuttler sent his return to net. Prannoy then won a net duel to earn the bragging rights.

In the second game, Wei had a 10-6 advantage but Prannoy erased the deficit and levelled the score at 11-11 when Wei hit wide. What ensued next was a close battle as neither gave an inch and moved neck-and-neck till 16-16.

The Indian then dominated a parallel game and closed it when Wei hit wide again. He then grabbed another point at the net to make it 18-16.

Prannoy continued to move ahead and grabbed two match points with a superb return on his opponent's backhand. The Indian fumbled at the net once but sealed the issue next with a quick net play.

Comments
Topics mentioned in this article
HS Prannoy Sourabh Verma Badminton
Get the latest Cricket news, check out the India cricket schedule, Cricket live score . Like us on Facebook or follow us on Twitter for more sports updates. You can also download the NDTV Cricket app for Android or iOS.