Novak Djokovic wore down Andy Murray in a gruelling four-set final to clinch a hat-trick of Australian Open titles on Rod Laver Arena on Sunday. 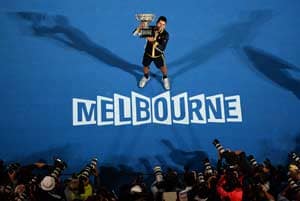 His legs are stronger than in the past. So are his resume, his nerves and his coaching staff. But Andy Murray still cannot solve the tennis riddle that Novak Djokovic represents at the Australian Open.

But then Murray - beaten again in the final on Sunday - is in excellent company.

Melbourne and its blue hardcourts are nearly a half-world away from the Serbian mountain resort Kopaonik, where Djokovic learned to play the game, and from the less rugged hills of the Cote d'Azur, in Monaco, where he now makes his home.

But Djokovic, still only 25, has transformed Melbourne Park into his Grand Slam redoubt: the distant outpost where he is toughest to trump, not just for Murray but for all challengers.

Djokovic has now won four of his six Grand Slam titles down under. No man has beaten him here since 2010, when Jo-Wilfried Tsonga managed it in five sets in the quarterfinals. Since then, Djokovic has used the tournament as a launching pad to the No. 1 ranking and reeled off three straight Australian Open victories, generating innumerable breaches in opponents' morale with his ability to rise to the big points and to contort and extend his body in successful pursuit of his foes' best shots.

Murray, his former junior rival in Europe and onetime doubles partner, knows Djokovic's strengths as well as anyone. He shares many of them, but on Sunday, after more than holding his own in the early phases, Murray gradually faded - suffering from a toe blister and a surprising inability to break serve - as the top-seed Djokovic put the finishing touches on his 6-7 (2), 7-6 (3), 6-3, 6-2 victory.

What seemed grindingly difficult early - the first two sets required to 2 hours 13 minutes - seemed much closer to routine by the end as Djokovic accelerated to win in 3:40, which qualified as a middle-distance final in this age of marathons.

"What a joy," Djokovic said after the match at Rod Laver Arena. "It's an incredible feeling, winning the trophy once more, and it's definitely my favorite Grand Slam, my most successful Grand Slam. I love this court."

Djokovic won his first Grand Slam title here in 2008 and is now the first man in the 45-year Open era to win three consecutive Australian Open singles titles. Only two other men have won three or more Australian championships in a row: Jack Crawford, from 1931 to 1933 and Roy Emerson from 1963 to 1967.

But neither of those men, both Australians, nor any other tennis champion has covered the angles and the corners quite like the elastic-limbed Djokovic. He dived to his right midway through the second set to hit a forehand behind the baseline, a modern update in this era of supreme defense to the diving volleys that net-rushers like Boris Becker used to hit.

Midway through the fourth set, as he was taking control for good, he sprinted to his left and skidded into nearly a full split with his back to the net as he hit a towering defensive lob that rebooted a point, one that Murray eventually lost with an error.

Then there were the moments - the trademark moments - when he was pushed wide into what was once considered a vulnerable position and responded with something strong and decisive.

"When he's on defense, he can actually win the point with one shot; that's an evolution of the game," said Andre Agassi, the former American star and four-time Australian Open champion who handed Djokovic the trophy Sunday night.

Murray, another supreme defender, can thrive by those ules, too, just not quite yet in Melbourne.

"His record here is obviously incredible," Murray said of Djokovic. 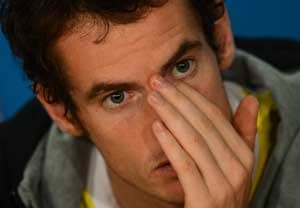 Murray has lost all three of his matches against Djokovic in Melbourne Park. He was soundly beaten, 6-4, 6-2, 6-3, in the 2011 final and was beaten last year in a five-set thriller of a semifinal that was a harbinger of Murray's greater performances to come.

Murray defeated Djokovic on his way to the Olympic gold medal in London and then in an epic five-set final at the U.S. Open to win his first Grand Slam singles title.

But he could not use that for leverage in Australia and has now dropped to 1-5 in Grand Slam singles finals.

Before this final, Murray had said that he was "ready for the pain," but he was presumably not referring to foot pain. He was treated for a blister after losing the second set, and when the match was over and Djokovic was celebrating, Murray sat on his seat, removed his shoes, tossed them aside and raised his racket high as if to smash it in frustration.

He refrained while also refraining from using his foot problem as an excuse, even if there were many a grim face among the sizable Murray entourage.

"I very rarely get blisters, but, I mean, 90 percent of the players on the tour will have played this tournament with some sort of blister or problem," Murray said. "It had no bearing at all on the result. It just hurts a little bit when you run."

Running, and then running some more, is an obligation when Murray and Djokovic meet. Although both players cracked with more regularity than usual (Djokovic had 61 unforced errors to 47 winners), there were still double-digit rallies in abundance as they mixed spins and paces with surgical care and fought for breath when the running was done.

"When you're playing the points like we were there, the positions you're sort of getting yourself into on the court, you expect those sorts of things," Murray said of his blister.

What was unexpected was that two of the best returners in the world were unable to break each other's serves at all in the first two and a half sets and that Murray never broke Djokovic's at all.

His best chance came in the second game of the second set when Djokovic fell behind by 0-40, serving into the wind. But Djokovic put away two forehand volleys, and Murray just missed a backhand on the three break points as Djokovic held firm.

"Crucial hold," Djokovic said. "After that I just felt mentally a little bit lighter and more confident on the court than I've done in the first hour or so."

And then - in the tiebreaker that seemed inevitable - there was the feather. Serving at 2-3 after missing his first serve, Murray prepared to hit his second and then spotted a small feather drifting into his line of sight, one that had come from a bird perched high on the edges of the open roof overhead.

Murray stopped his service motion, retrieved the feather before it hit the court and proceeded to double-fault to fall behind, 2-4. He won only one more point in the tiebreaker from there. 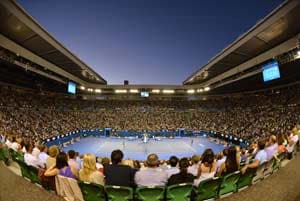 "It just caught my eye before I served," he said of the feather. 'I thought it was a good idea to move it. Maybe it wasn't because I obviously double-faulted.

"No, you know, at this level it comes down to just a few points here or there. My probably biggest chance was at the beginning of the second set. Didn't quite get it. When Novak got his chance at the end of the third, he got his."

The first break of the match came in the third set, with Murray serving at 3-4, and Djokovic broke him twice more in the final set. By then Murray had already squandered his fourth and last break point, missing a backhand return and then whacking himself in the forehead with his racket strings.

Murray was presumably not expecting that sort of pain, either, but playing Djokovic on his court, in his redoubt, is a now-annual source of all kinds of misery. Â

Comments
Topics mentioned in this article
Australian Open 2013 Tennis Novak Djokovic Andy Murray
Get the latest updates on IPL 2021, IPL Points Table , IPL Schedule 2021 , live score . Like us on Facebook or follow us on Twitter for more sports updates. You can also download the NDTV Cricket app for Android or iOS.