Murray, US Open trophy in his cabinet and a veteran of six Grand Slam finals already, shed no tears for the loss against Djokovic and gave an assured speech in defeat. 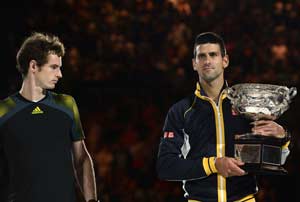 Andy Murray has the physique, the technique, the demeanour and the belief. Now all he needs is the killer touch.

For more than an hour, the Scot dominated the Australian Open final, leaving world number one Novak Djokovic blinking, agitated and gasping for breath.

Three break points in game two of the second set, and the champion was on the ropes. But Murray's chance came and went, and Djokovic gratefully grasped his reprieve.

Eventually it was a familiar story as the Serb reeled off sets two, three and four, and then kissed the Norman Brookes Challenge Cup late in the night at the Rod Laver Arena for the third time in successive years.

Murray, US Open trophy in his cabinet and a veteran of six Grand Slam finals already, shed no tears for the loss and gave an assured speech in defeat.

Afterwards, he was proud of his achievements in recent months, when he has reached three straight Grand Slam finals, and finally won one, along with the Olympic singles title.

"Well, I mean, there's going to be some obvious reasons for me feeling a little bit better. The last few months have been the best tennis of my life," he said.

"I made Wimbledon final, won the Olympics, won the US Open. I was close here as well. It was close. No one's ever won a Slam, the immediate one after winning their first one. It's not the easiest thing to do. And I got extremely close."

Crucially, Murray also mastered Roger Federer for the first time in a Grand Slam match, downing the 17-time major winner over five semi-final sets in which he was always the likely victor.

"I have to try and look at the positives of the last few months, and I think I'm going the right direction. This is the first time I've beaten Roger in a Slam over five sets," he said.

"I think I dealt with the situations and the ebbs and flows in that match well. I felt much more comfortable on the court today than even I did at the US Open, so that has to be a positive."

So comfortable, in fact, that Murray even stopped in the middle of a second serve, at 2-2 in the second-set tie-breaker to catch a falling feather. He missed the serve and lost the set.

Murray's physical handlers have transformed a spindly youth into a powerful specimen, thanks to his regime of beach running, weights, bikram yoga, protein shakes and daily dinners of 50 pieces of sushi.

His coach Ivan Lendl has given him the mental steel to win Grand Slams. Now he needs to find the ability to apply the coup de grace and quickly put opponents away when he is in front.

"He said, 'Bad luck'. That's it. There's no point going into huge detail about the match two minutes afterwards," Murray said of Lendl. "We'll go away and spend a bit of time apart.

"When I go to start training over in the States, we'll discuss not just this match but the start to the year and the things I need to improve on if I want to keep getting better."

Comments
Topics mentioned in this article
Australian Open 2013 Tennis Novak Djokovic Andy Murray
Get the latest updates on India vs South Africa and check out  Schedule, Results and Live Score. Like us on Facebook or follow us on Twitter for more sports updates. You can also download the NDTV Cricket app for Android or iOS.