When Novak Djokovic celebrated his win by offering chocolates

A master at playing to his audience, Djokovic came with several boxes of chocolates to his post-match news conference and then played host as he distributed them to a room packed with journalists. 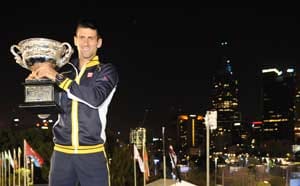 Novak Djokovic wrapped up his victory at the Australian Open on a sweet note.

A master at playing to his audience, Djokovic came with several boxes of chocolates to his post-match news conference and then played host as he distributed them to a room packed with journalists.

"Please, take two," Djokovic said, offering his box of treats to one reporter at a time.

"I see nobody's on a sugar free diet," he joked as the chocolates began to disappear.

Djokovic has won four of his six major titles at Melbourne Park, and likes to give a little something back to the crowds who cheer him on.

An entertainer on court and off, Djokovic is known for celebrating hard-fought victories at Rod Laver Arena by ripping off his shirt. He kept his clothes on for this final, but did bare his chest after winning a five-hour thriller over Stanislas Wawrinka in the fourth round.

"It's definitely my favorite Grand Slam," Djokovic said during his victory speech on center court. "It's an incredible feeling winning this trophy once more. I love this court."

To mark the national holiday on Saturday, Djokovic pinned a fuzzy koala to his sweat shirt and walked into his pre-final news conference saying, "Happy Australia Day!"

He was asked on Sunday if his good humor was a conscious effort, which made Djokovic turn philosophical.

"I try to enjoy what I do, and every moment of the life that I have is a blessing," he said. "What else can you do but to be happy and try to bring that joy to the other people around - especially in the tournaments."

"Everybody has bad days, I'm not always funny or laughing," he added.

He then apologized to reporters for canceling the winner's traditional day-after news conference scheduled for Monday but said he wanted to get back to Europe to begin practicing for the Davis Cup which starts next weekend.

That's when he brought out the chocolates, as a consolation prize. "Let's keep it sweet," he said.

Comments
Topics mentioned in this article
Australian Open 2013 Tennis Andy Murray Novak Djokovic
Get the latest updates on India vs South Africa and check out  Schedule, Results and Live Score. Like us on Facebook or follow us on Twitter for more sports updates. You can also download the NDTV Cricket app for Android or iOS.